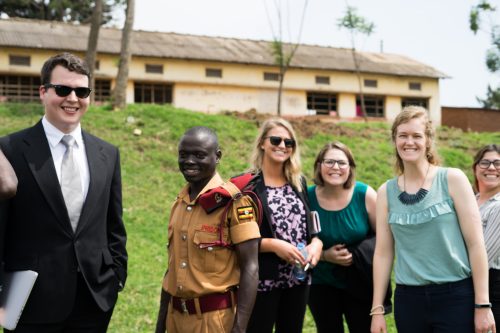 A powerful week contains many powerful stories. A team of 18+ people contains many different perspectives, and not all of them would be likely to agree on how every event occurred.

I'm going to tell you about a particular individual that I spent time with in Uganda. His name is Tom, and he is a prison guard in a maximum security prison in Uganda. I would go back to Uganda, happily, just to spend a week getting to know and understand Tom. I'd assume that he is roughly 40 years old and no more than 5'7". Tom just appeared to be an average prison guard and individual upon my first meeting him, but he quickly showed his curiosity and slowly showed his intelligence.

Tom was the first prison guard that worked as a translator for my team in Jinja. I won't talk about my cases much, but I'm happy to say that our first case was a doozy. The alleged murderer we were representing ended up receiving 5 years instead of the 20 they wanted. We found nuances and issues throughout the case file and police findings. This is when Tom decided he was more interested in what we were doing than merely being a translator.

He began to listen. He would listen to us deciding what to ask next. He would look quizzically if we asked a poor question. He knew the direction we needed to guide the suspect and he wasn't willing to step on our toes or act as though he knew something we didn't. he just kept his head down, kept translating, and hoped we would make it work. We did. But Tom was bought in.

Moving forward, we had three other cases on my first day a the prison. Each of the suspects spoke a different language: Lusoga, Swahili, and two other local dialects. Tom translated all four. We didn't ask him how many languages he knew until he told us he would translate the third person. This means he would have to be fluent enough in English and three other languages to flow in and out of each. When asked how many languages he was comfortable with he listed 1,2,3,4… 11. 11 languages that he was comfortable conversing in, outside of English, and had the ability to bring each of those languages into English.

I'm not sure how Tom knows what he knows. I'm not sure how he has been able to learn, work, and be such an incredible individual. But he has and he cares more for those prisoners than we do. Each of his translations included him touching the prisoners affectionately on their knee, shoulder, or hand. He was able to smile and comfort murderers and rapists as though they were his friend.

Tom was like Jesus and saw people the way I think Jesus would. I have his WhatsApp number and if I were to ever return to Uganda, which I hope to, he would be my first phone call.