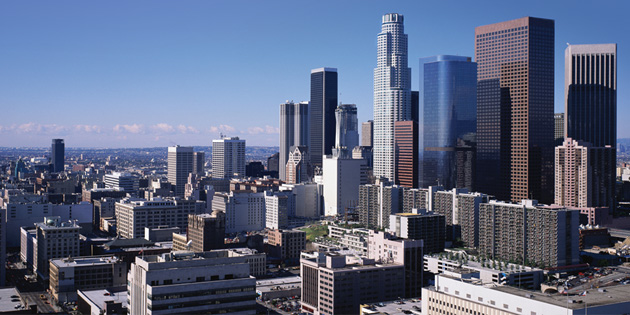 Boasting one of the largest legal communities in the world, greater Los Angeles provides students with opportunities for hands-on experience outside the classroom, as well as a large potential job market. Only thirty miles away, downtown Los Angeles is a focal point for the emerging Pacific Rim, and serves as a center for international trade and finance. Many Pepperdine students interested in entertainment law take advantage of Pepperdine's unique proximity to the entertainment world, enjoying internships and full-time positions with the surrounding studios and production companies.

As a cultural and entertainment center, greater Los Angeles provides all of the distractions and diversity of a big city, allowing students to eat dim sum in Chinatown, splash in the waves at Venice Beach, and root for the Lakers at Staples Center, all in the same day. Just minutes away from campus, the surrounding Santa Monica Mountains provide numerous trails for biking and hiking.

Beverly Hills - The famous shopping and dining grounds of the Stars. Make sure to take a trip down famous Rodeo Drive while you are there. Beverly Hills is 24 miles away from campus. Take PCH south to the 10E, to the 405N and exit on Santa Monica Blvd., Right on Santa Monica, Left on North Beverly.

Calabasas Commons - A local outdoor shopping area with a movie theatre, Barnes and Noble Bookstore, and various stores and restaurants. The Calabasas Commons are 15 miles away from campus. Take Malibu Canyon to the 101S, Exit Parkway Calabasas to the left, The Commons will be on the right side.

Catalina Island - On a clear day the island is visible from the school Cafeteria. Activities on the island include water sports, island tours, and various seaside shops. The Catalina Express boat leaves daily from San Pedro, Long Beach, and Dana Point ports.

Disneyland - "The Happiest Place on Earth". Disneyland is 54 miles away in Anaheim. Take Pacific Coast Highway south to the 10E, to the 15S (Santa Ana Freeway) and exit on Lincoln Ave.

Dodger Stadium - Take Malibu Canyon to the 101S, Exit Alvarado, go north, then turn right on Sunset. Go approximately one mile and turn left on Elysian Park Avenue. You will run into Dodger Stadium. Tickets range from $6-$21 per game.

Griffith Park Observatory - The Observatory closed to the public for a three-year renovation in January, 2002. According the Observatory's website, the Griffith Observatory has been a major Los Angeles landmark since 1935. It is visited by nearly two million people each year and ranks as one of the top tourist attractions of Southern California. It sits on the southern slope of Mount Hollywood where it commands a stunning view of the Los Angeles basin below. Thousands of people enjoy the view from its balconies, especially at night. The Observatory grounds are open to the public Tuesday-Friday from 12pm-10pm and Saturday and Sunday from 10am-10pm for visitors to enjoy seeing the building's exterior and the spectacular view of Los Angeles. The Observatory is closed on Mondays. 2800 East Observatory Road, Los Angeles, CA 90027.

The Grove LA- The Grove Los Angeles is a shopping and entertainment complex built adjacent to the historic Farmers Market. It centers on a landscaped park and a dancing fountain. It's become a popular spot for shopping and dining, and its lively crowds and street grid layout making it feel like an old-fashioned downtown.

Hollywood - "As LA's hottest new destination, Hollywood & Highland gives a physical presence to the glamour and excitement for which Hollywood has always been known - and what visitors worldwide look for when they visit this entertainment capital. It's the definitive place where movie and television production, high fashion, and fine dining come together." Take the 101 South, and exit on Exit on Highland Ave/Hollywood Bowl; merge onto Cahuenga Boulevard. Cahuenga becomes N. Highland Avenue. Stay on Highland until Hollywood Boulevard.

J. Paul Getty Museum - With incredible views of Los Angeles, all the way to the ocean, this is a great place to visit even if you are not interested in viewing the exhibits. The Getty Center is centrally located in Los Angeles near the San Diego Freeway (Interstate 405) and the Santa Monica Freeway (Interstate 10). Take the Getty Center Drive exit from the 405 and follow the signs.

The Getty Villa Malibu - The Getty Villa is an educational center and museum dedicated to the study of the arts and cultures of ancient Greece, Rome, and Etruria. Located on Pacific Coast Highway in Pacific Palisades (just south of Pepperdine), the Getty Villa is the place to see Greek, Roman, and Etruscan antiquities arranged by themes including Gods and Goddesses, Dionysos and the Theater, and Stories of the Trojan War. Tickets must be purchased in advance, although admission is free. Parking is $8. The Villa is open Thursday-Monday from 10am-5pm.

Magic Mountain - A popular theme and adventure park associated with Six Flags. Magic Mountain is 48 miles away from campus in Valencia. Take Malibu Canyon to the 101S, to the 405N and exit on Magic Mountain Parkway.

Malibu Theatres - A small movie theatre with good student rates. Take PCH south to Cross Creek Road and it will be on your right.

Mann's Chinese Theatre - "Grauman's Chinese Theatre is the most famous theatre in the world. Since its gala opening in May 1927, millions of movie patrons and visitors to Hollywood have been drawn to the theatre. Filled with exotic art from China, the theatre's jade-green bronze roof rises 90 feet into the air. Spectacularly lit at night, the Chinese is a true Hollywood landmark."

Museum of Tolerance - "The Museum of Tolerance is a high tech, hands-on experiential museum that focuses on two central themes through unique interactive exhibits: the dynamics of racism and prejudice in America and the history of the Holocaust - the ultimate example of man's inhumanity to man." Students: $5:50 (with ID) Adults: $9 (310) 553-8403 Take PCH N, Santa Monica Freeway (10) east - exit at Overland/National. Turn right and right (north) again on Overland Ave. and continue towards Pico Blvd. Turn right (east) on Pico Blvd.

Venice Boardwalk - Venice, California is a desired destination for travelers the world around. It. s unlike any place on Earth. Well known for its artists, street performers, and funky atmosphere. It is a virtual carnival running year round with free admission.

Westwood Village - "This intimate, inviting, hospitable and sophisticated community on the Westside of Los Angeles' sprawling metropolis is the very definition of an urban village. With nearly 250 choices in shopping, world-class dining, and top-notch movies and entertainment, the Village is a favorite destination for work or play, and offers one of the few pedestrian-friendly environments in the city." Take the 101S to the 405S, then take the Wilshire exit and go east. Then turn left on Gayley Ave, Westwood Blvd, or Glendon Ave.

We invite you to come experience our campus and community first-hand.