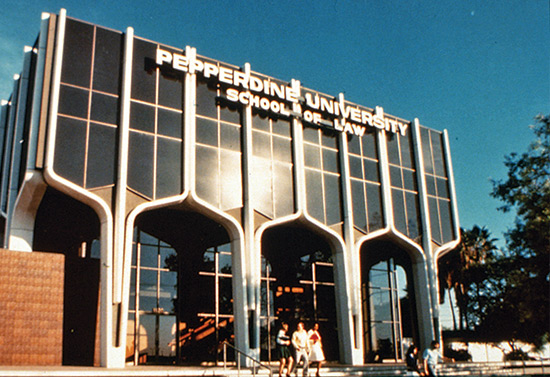 In Good Faith, a newly published book on its history, tells the story of how the school grew from its humble origin to become one of the premier law schools in the United States (purchase here).

1970 - Pepperdine's School of Law operates out of a free-standing two-story frame building in Santa Ana, California. The school earns the State Bar of California provisional accreditation and has its first full-time day class of 34 students. The first full-time faculty member is Professor Wadieh Shibley, and the first full-time dean is Ronald F. Phillips.

1973 - The law school relocates to a larger facility in Anaheim, California. Professor Frederick I. Moreau serves as the first Distinguished Visiting Professor. The school's first moot court dinner -- which became the annual Caruso School of Law dinner -- is held at the Disneyland Hotel.

1981 - Lord Denning, Master of the Rolls, presides over a moot between British and Pepperdine students at Gray's Inn in London.

1982 - Pepperdine establishes the school's Board of Visitors.

1984 - Student Bill Henslee serves as chair of the Law Student Division of the American Bar Association. Terry Giles establishes the first scholarship funded by an alumnus.

1997 - Professor Richardson Lynn is appointed dean of the Caruso School of Law.

1998 - Pepperdine's Straus Institute for Dispute Resolution is ranked the top program in the nation according to U.S. News and World Report.

1999 - The Caruso School of Law welcomes Doug Kmiec of Notre Dame, who holds the inaugural Caruso Family Chair in Law.

2004 - Kenneth W. Starr is appointed dean of the Caruso School of Law after holding numerous positions of prominence, including Solicitor General of the United States and United States Circuit Judge.

2006 - Professor Ed Larson, who won the 1998 Pulitzer Prize in History for his book, Summer for the Gods: The Scopes Trial and America's Continuing Debate Over Science and Religion, joins the school as the Hugh & Hazel Darling Chair in Law.

2008 - The Caruso School of Law attains membership in the prestigious Order of the Coif.

2011 - Deanell Reece Tacha, a Scandia, Kansas, native with a distinguished career in the federal judiciary and higher education, begins as the school's fourth full-time dean (not including interim deans) and second Duane and Kelly Roberts Dean.

2017 - Paul L. Caron, one of the leading entrepreneurial tax scholars in the nation and Publisher and Editor of Tax Prog Blog, begins as the third Duane and Kelly Roberts Dean of Pepperdine Caruso Law.