Throughout my time with Grameen Bank, my life felt like a movie—like I was watching myself on some giant screen and everything around me was a Hollywood sound stage. In short, Bangladesh was an incredible adventure and life changing experience!! The following entry imparts two days of the Grameen experience shared by fellow law student Amadea Goresh and me in northern Bangladesh.

Grameen Bank is making an amazing and inspirational impact on poverty reduction and living conditions in the third world. For those unfamiliar with Grameen Bank, the bank and its founder, Dr. Muhammed Yunus, received the Nobel Peace Prize this year for developing microcredit. Microcredit is the practice of giving small loans (starting at maybe $30) to the poor and landless--those who would never qualify for a loan from a larger bank. As these loans get repaid, the borrower can increase the size of the loan. The loan money is used to buy something like a small plot of land for farming, a cow for selling milk to the market, or inventory for a small grocery store. Before the loans, the borrower had to find enough work just to afford the day's allotment of rice. Now, after receiving the loan, the borrower can invest the money in some trade or business that makes money for them. This has allowed millions of people in Bangladesh to rise above the $1 per day poverty line set by the World Bank. It has also greatly increased the standard of living and allowed people to save money to improve homes or fund a child's education. 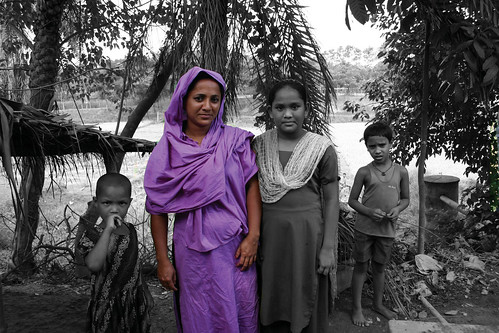 Arriving by rickshaw in the small, rural village of Salanga, Villagers certainly noticed the new foreigners rolling into town. As we rode in, all eyes glanced up from their previous interests to watch us ride by. After driving through most of the town, we came to a two-story red brick building—much different than the small, metal sheds that composed every other building in town. This was the Grameen office and our home for the next few days.

After lunch, we visited small businesses that were funded through Grameen loans. Our first stop was drew a strong connection between my Christian faith and microcredit. We took a rickshaw to a small metal building in the village. Inside, an organic smell and hum of a large engine filled a dimly lit room. We were greeted by Shameen, the owner of this business, who, before Grameen Bank, had nothing. Barely enough rice to even feed his family—if that year's rice harvest was plentiful. After founding and growing his business with Grameen loans, he could generate income on his own, build a better house, and afford to send his kids to school. His business, ironically, is processing mustard seeds. It was a moment that brought me back to Matthew 17:20, and having a faith the size of a mustard seed. Millions of people are putting faith in tiny loans, and it's changing lives throughout the third world. After a few minutes, the entire building was flooded with local people wanting to see the foreign visitor. Each of these people had their life changed through microcredit, as well as everyone in the entire village, and 7 million more in Bangladesh. For me, it was a poignant illustration of Mark 17:20, and how microcredit is truly is moving the mountain of poverty in this world.

Loading up on the rickshaws again, we visited the home a Grameen student loan recipient. This family had a carpentry shop, making furniture from local bamboo. The mother, who was a Grameen member, received a student loan for her son, who was studying accounting at the local college. He wanted to move to Dhaka to live the "luxurious life." Surprisingly, college tuition only costs approximately $200 per year. It was great to see microcredit improving the education disparity in Bangladesh as well. When we returned the office, the local kids started congregating and asking us to play soccer with them. So, we made the long, hot walk back into town. After kicking the ball around for a few minutes, we were drenched and sweat and struggling in the heat. However, it drew quite a crowd to the field, as apparently we were the first foreigners to join them on the soccer field.

Next morning, we attended a Grameen center meeting for male members. This was fairly unique, since Grameen is 90% composed of female members. We were running late and the men waited two hours for us to arrive! One thing that surprised us was how many of them own cell phones—maybe one third to one half of them. Cell phones are really cheap and heavily advertised in rural Bangladesh. It is surprising because they have next to nothing, yet own a cell phone. But, there are no landlines, and cell phone minutes are cheaper than traveling if you need to communicate with someone in another city.

After the men's meeting, we visited a women's meeting to interview another set of borrowers. They took us to their homes and businesses to show what microcredit had done for them. First, we visited pottery shop that was making large pots for holding rice or water. These pots were nearly three-foot in diameter. We walked across the street to another pottery shop where they were making smaller pots for cooking and eating. The owner cut some clay and took us into his shop to spin the clay on his pottery wheel. We also watched women make pots by hand, carefully forming them without a wheel. 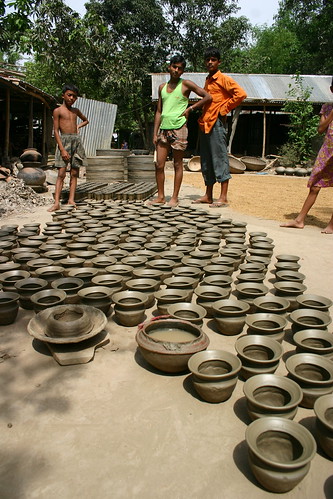 Our next destination was the Grameen Fisheries, a microenterprise project about an hour away. We caught a public bus to take us there. Public buses in Bangladesh, by the way, are everything you imagine them to be. They are crowded, hot, and blaring undisclosed ethinic music. The Grameen office we arrived at served many functions—community center for microloans, office of the fisheries and livestock programs, and the regional computer data center. We first observed the dairy processing room, where employees pasteurize milk and place it in small, plastics bags for resale. The dairy program is one of Grameen's microenterprise programs where a member can use a loan to purchase a cow, then sell the milk to Grameen's pasteurizing plant, which employs locals, and sells the milk to grocery stores started by Grameen members. It's a very cyclical, win-win program.

The fisheries were a few kilometers away from the office and I was very excited because we got to ride in a UN jeep out to the site. The fisheries were built decades ago by a feudal lord. There are an unbelievable 808 ponds at this site. The largest pond being 26 acres! Every morning, Grameen fishes at least one of the ponds with a giant net, which they scoop from one side to the other. We visited the fish raising building, which was a large metal shed that enclosed several circular baths and several small pools. The pools were used for applying a hormone to release the eggs from the female fish. The eggs are then placed in the circular bath to rotate with a slow current, which helps with the fish growth. When the fish are large enough, they are moved to the ponds outside. What I found interesting was that the type of fish harvest was primarily carp and versions thereof. In Bangladesh, carp is a good fish for eating! 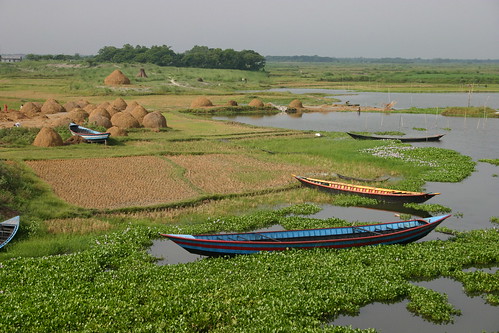 After returning to Salanga, I was enticed back out of the Grameen office by the rice harvesting activities outside. Rice is the staple product of Bangladesh, and this year was plentiful. The villagers across the street from the office were threshing the day's harvest. We went out to observe. They had a spinning gas powered machine that would separate the rice from the stalk. One man would stand and stick the rice on the machine, while a woman would sit below and sweep the rice into a pile. The rice stalks were blown up in the area and eventual created giant piles of stalks that would stand 10-12 feet high. I wanted to see more, so will and I walked out into a field accompanied by an entourage of local kids. I walked out into a rice paddy where 6-10 men were harvesting. Despite the language barrier, they invited me to come up and try cutting some rice myself. It was more difficult than they made it look. The blade was very sharp and with my first swing, I just about took my instructor's leg off. After cutting a few clumps, I handed it back and watched them cut at lightening speed.

In the evening, the roof of the Grameen office was our refuge from the heat, where we could find an occasional cool breeze. On our final night, our translator came to the roof to call us in. Some center managers assembled downstairs and wanted to meet with us before we left. The meeting started with us asking questions regarding their positions and their work with Grameen. Eventually, the conversation shifted to international politics and American policy. They were all surprisingly abreast of the events in Iraq and Afghanistan. Their questions commonly were fixed on our opinions of President Bush and U.S. policy. At one point, while our translator was interpreting our statement, I turned to Amadea and said, "You know, we're really the ambassadors for America here. We're maybe the first Americans they've ever met, and maybe the only they will ever meet." It's a very strange feeling to know that you're setting the precedent for someone else's opinion of your country. I think the same goes for our actions in the villages. Hopefully things like playing soccer with the kids and visiting the farmers out in the rice field made a good impression of our country and the Grameen Bank. Everyone in town knew that three Americans had arrived. I would be surprised if more than a handful of Americans have ever, or will ever, visit that village. 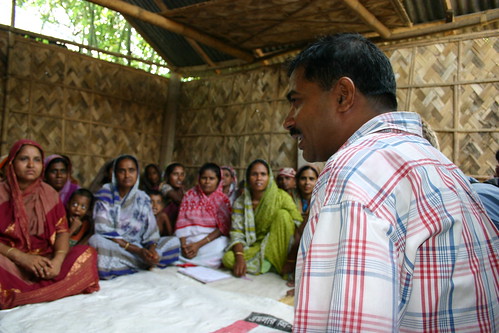