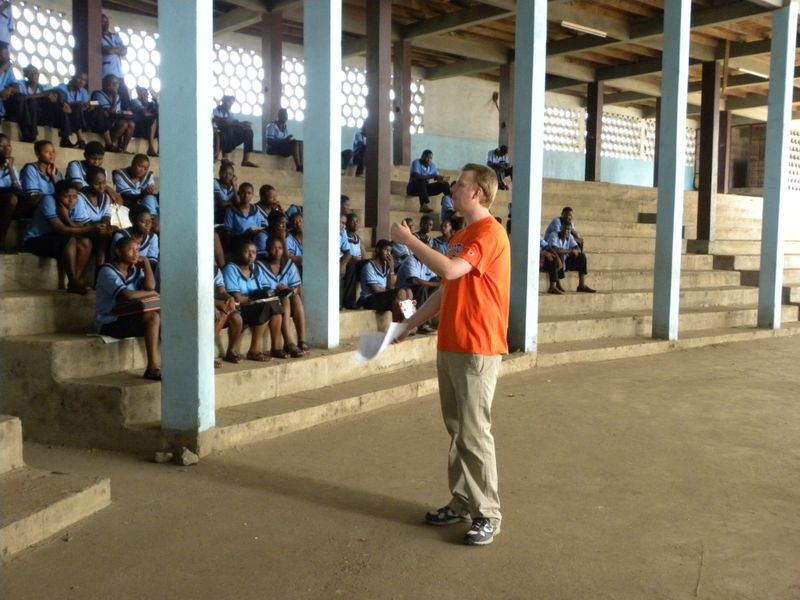 The date is Monday April 27th, the date of my first school visit to hold a lecture/discussion on good governance and the fight against corruption.  I started out in a familiar location, a school in my home base town of Tiko, Cameroon.  The proprietor of the school is my roommate and colleague's landlord, neighbor and friend, Mr. Mbu Steven or "PaMbu".  The Imperial Academy of Arts and Sciences (IMPAAS) is right around the corner from where we live and I see the students pass every day after class lets out.  Monday was the first time I would address them.

I didn't know what to expect for this first session.  Would the students listen?  Would they care? Would the even be able to understand the words coming out of my mouth?  I walked into an amphitheather setting.  Much larger than I would have expected.  Students were milling about.  Some were already seated, but spread out and high up towards the back.  I took a little while for one of the administrators to round them up.  I told them I wouldn't bite and asked that they bring it in closer.  My colleague Prince Fotabong Christian, "Chris",  introduced us and our organization and handed it over to me.  The students were a bit restless and chatty.

I tried to start, but there was a lot of whispering and giggling.  I later learned that for most of them, I was the first white they had ever seen in person.  One said to "Chris" that I needed an interpreter.  I am now worried that this could be a huge problem for my entire education program.  I slowed it down and spoke as simply and clearly as I could.  I began to reel them in.  I engaged them with simple questions.  "Who loves Cameroon? Who is proud to be from Cameroon?"  They all responded resoundingly in the affirmative.  I told them how happy I was to be there and how wonderful everyone has been to me since I arrived.  I asked them to identify the problems in their country.  The first was unemployment.  The rest were all forms of corruption.  This was my point exactly.  Corruption is at the core of all of Cameroon's troubles.

I proceeded through my presentation with the passionate and attentive eyes of the majority of them watching me.  We discussed the forms of corruption, identified all of its consequences from the loss of billions of Central African Francs a year, to the loss of foreign investment and the jobs it would bring, to the simple social consequence of not being able to trust your countrymen.  They told me it makes them sad, and you can see it in their eyes, the frustration, the hopelessness.

That is why at the core of my presentation is the simple motivation and reason why I chose to address students, that they are the next generation of leaders and it is up to them to stop the madness.  They need to feel empowered.  Right now, they feel powerless to change anything.  I tell them that they need to erase the words "I can't" from their vocabulary.  If you say "I can't" then you won't.  The most important thing for them is to keep that spirit that they can affect change and to never give up.  To have the determination to try and try again.  "You only fail, when you fail to try".  If one door closes, try another.  All basic lessons in positive attitude, determination and hard work.  But no one else tells them this.

At the end of the program, after a lot of talk about corruption, I did Q&A.  At the end, one girl was shaking her head.  She said its useless, she "can't" do anything about this.  I was pleased when many of her colleagues were upset by this comment.  They knew what I was going to say because I had said it at the beginning.  I said again, if you say you "can't" then you won't.  Nothing will change.  The world's problems may seem impossible, too big for any one person to do anything about.  But we have to try and keep trying until we achieve the results we want. We must unite.  We will never achieve anything unless we try.  To Change the World, you Start with One Step.