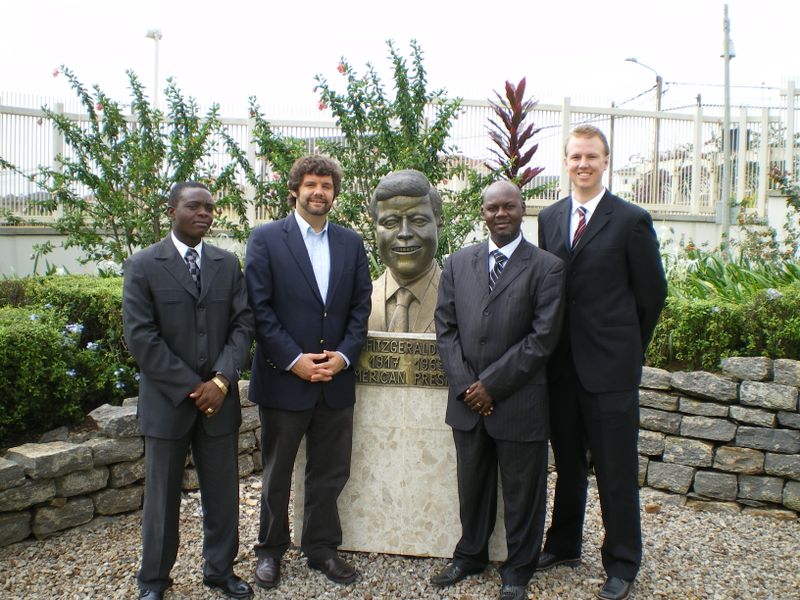 The Global Network for Good Governance (GNGG) is a homegrown Cameroonian NGO fighting for human rights and against corruption.  The fact this organization was created by Cameroonians was one of the things that drew me to them in the first place.   It is one thing for an international organization to drop in and try to tell people what their problems are and how they should fix them, but I think it is much more important that a people take a stand for themselves.  But as such, GNGG's resources are extremely limited and they need all the support they can get.  So, I thought it a good idea that we get in touch with the largest and most powerful supporter of human rights and good governance in the world, the United States government.

I contacted the Embassy and arranged for us to have a meeting with members of the Political and Public Affairs Sections' staff.  On Tuesday, we made the 5 hour trip from the English-speaking South West Province to the French-speaking capital of Yaounde to spend the night in preparation for our Weds. morning meeting. On the trip, I got my first look at the main urban areas of Cameroon, Douala and Yaounde.  Urbanization is becoming a large problem for Africa as young men leave the rural areas for the cities looking for better opportunities which often aren't there, leaving them living packed together in slums.  Parts of Douala in particular were unlike anything I've ever seen.

On Weds. morning we made our way to Avenue Rosa Parks and the U.S. Embassy.  The meeting went pretty much as I expected.  We met with the Deputy Chief for the Political Section and the Information Officer.  Secretary General of GNGG, Magistrate Justice Mukete Tahle Itoe introduced us and the work of GNGG.  I then made a presentation of my good governance and anti-corruption education program.  After which, the Embassy staff expressed their full support for our efforts and encouraged us to keep fighting.

I never expected the Embassy was going to be prepared to support any of our programs financially, but we did put GNGG more on their radar.  The organization is now a part of the Embassy's official network of NGO's.  I think in the future, as more project funding becomes available, GNGG will have an excellent shot at being rewarded.

The Embassy was particularly interested in the fact that I was from Pepperdine.  There is almost zero U.S. legal presence and plenty of need for a whole host of issues: child labor and trafficking, U.S. asylum law, female genital mutilation, to simple advisement on the American legal system.  The Embassy expressed a great deal of interest and support for a continued relationship with Pepperdine in Cameroon.  I hope that this is something that I can help facilitate as Cameroon and GNGG offer a wide range of issues for Pepperdine students to work through.  I hope that my coming here will be the beginning of a lasting partnership between Pepperdine, GNGG and the United States.  To Change the World, You Start with One Step.