Women in Hollywood: 100 Years of Negotiating the System

Straus Institute for Dispute Resolution and the 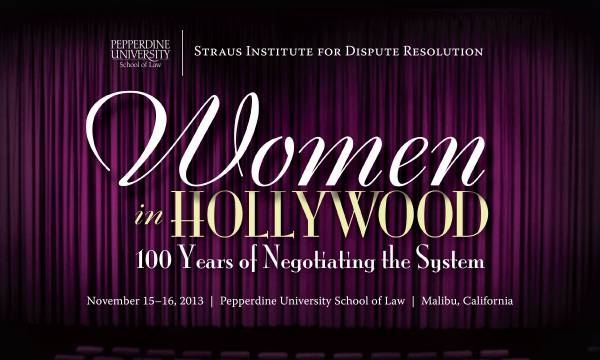 Women have played important roles in the entertainment industry from its earliest days. Mary Pickford leveraged her success as an actress into the role of producer and one of the founders of United Artists. Famed screenwriter Frances Marion helped found the Writers Guild of America. Bette Davis and Olivia de Havilland made important strides on behalf of actors in the days of the studio system.\

But after a century, women still face significant challenges in Hollywood. Individual female actors, writers, and directors often experience communicating, negotiation, and resolving disputes very differently from their male counterparts. Moreover, studies by The Center for the Study of Women in Television & Film, The Geena Davis Institute on Gender in Media, the Writers Guild of America, West and efforts by the Directors Guild of America Women's Steering Committee have highlighted the relative scarcity of opportunity for females in the industry.

This conference, Women in Hollywood: 100 Years of Negotiation the System is intended to focus on the special issues and challenges facing women individually and collectively in the entertainment industry. The program will:

For questions or to receive information on lodging and transportation, please call Lori Rushford at 310.506.6342 or email lori.rushford@pepperdine.edu