Pepperdine Caruso Law Hosts "At the Heart of Gold" Screening

Pepperdine Causo Law hosted a screening of At the Heart of Gold: Inside the USA Gymnastics Abuse Scandal on February 7. Following the film screening, Professor Maureen Weston moderated a discussion with Larissa Boyce, a survivor who was featured in the film, and the film's producer attorney David Ulich, of Sheppard Mullin, and Sidewinder Films/Foundation for Global Sports Development (GSD). The 2019 documentary film is based on the the scandal involving USA Gymnastics National team's doctor abuse of young gymnasts and focusing on the the brave and courageous surivivors who spoke out to ensure his conviction and permanent removal from sport. The event was co-sponsored by the Pepperdine Institute for Entertainment, Media, Sports, and Culture, the Palmer Center for Entrepreneurship and the Law, and the Pepperdine Caruso Law Entertainment, Media, and Sports Law Program. The GSD Foundation generously made a donation to the Pepperdine Caruso Law Entertainment, Media, and Sports Program following the event.

About "At the Heart of Gold"

At the Heart of Gold: Inside the USA Gymnastics Scandal, reveals a dangerous system that prioritized winning over everything else, including protecting young female athletes. Through interviews with dozens of survivors, as well as coaches, lawyers and journalists, the film exposes an environment in which young women spent their youth competing for victory on a world stage, juxtaposed against a culture where abuse was hidden, and lives were forever damaged. This screening is part of Courage First, the GSD Foundation's program focused on abuse prevention. 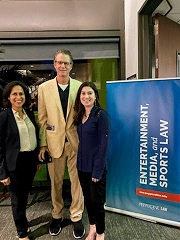