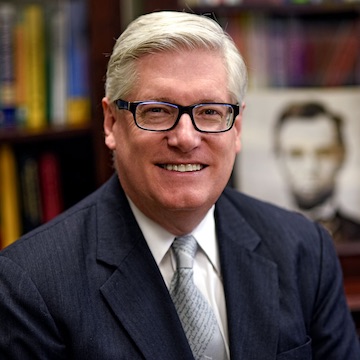 Stipanowich, who holds the William Webster Chair in Dispute Resolution as a Professor of Law at Pepperdine Caruso School of Law, transitioned back to full-time teaching and research this fall after serving fourteen years as co-director of the world-renowned Straus Institute for Dispute Resolution. During his leadership tenure, the Straus Institute was ranked first among academic dispute resolution programs by U.S. News & World Report twelve times.

Having stepped down from his leadership position, Stipanowich is able to devote more time to teaching and his research, which primarily focuses on Abraham Lincoln's legacy as a problem-solver, leader, and manager of conflict. In the online symposium "Presidential Leadership in Times of Crisis," hosted by Caruso Law on Thursday, October 29, he will speak about Lincoln's role in the emancipation of four million Black Americans. "Lincoln's evolution as a lawyer, politician, leader, and human being offers many lessons on the critical importance of rational deliberation, effective self-management, empathy, and the ability to listen" Stipanowich explains. "He is a perfect exemplar for our time." 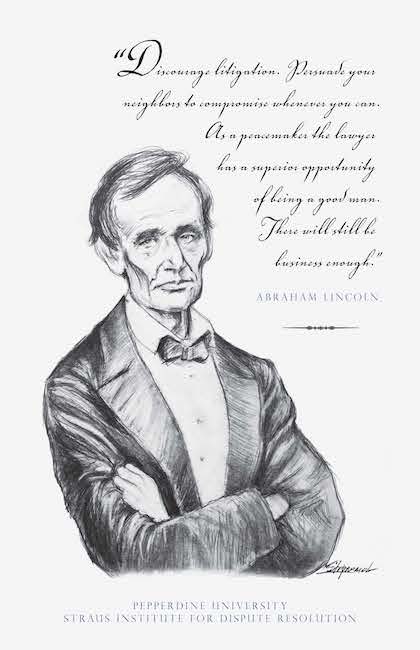 An Attorney Specializing in Dispute Resolution
Stipanowich's own evolution as a teacher, scholar, and thought leader is summarized in Personal Histories in Conflict Resolution, a new book about trailblazers in the field dispute resolution. This autobiographical chapter is a fascinating retelling of the events and good fortune that led Stipanowich, despite his love of art and architecture, to a career in law with a specialty in arbitration and mediation. Equipped with professional degrees in architecture and law, he joined a well-known law firm specializing in complex construction disputes—a practice on the cutting edge of change in conflict resolution. Besides representing clients in court litigation, Stipanowich acquired broad experience with arbitration and negotiated settlements, including pioneering efforts at mediation. When he left law practice for a career in academia at the urging of a mentor, he brought with him many ideas to explore as a teacher and scholar.

Academia and Scholarship
As a young law professor at the University of Kentucky, Stipanowich's publications on arbitration attracted the attention of two prominent contracts scholars, Ian Macneil and Richard Speidel. He then co-authored the five-volume treatise Federal Arbitration Law, which was named Best New Legal Book by the Association of American Publishers, and was cited by the U.S. Supreme Court and many other tribunals. Stipanowich went on to author many other works including the seminal Resolving Disputes: Theory, Law, and Practice. He was recognized as a "leading dispute resolution scholar" in an Eleventh Circuit decision.

Stipanowich's leadership in the dispute resolution field has extended well beyond teaching and scholarship. He headed a national commission on the future of arbitration, resulting in a book of practice guidelines for business users; acted as chief drafter of a national Due Process Protocol for resolution of consumer disputes; served as chair of the body guiding policy and practice in securities arbitration; advised on the Revised Uniform Arbitration Act and Uniform Mediation Act, ethical codes, and leading arbitration and mediation rules; and co-founded a regional mediation center and the College of Commercial Arbitrators. In 2001 he became CEO of the New York-based International Institute for Conflict Prevention & Resolution (CPR), a preeminent non-profit think tank focused on promoting creative methods for the resolution of conflict in the U.S. and around the world.

Advancing the Work of The Straus Institute
In 2006, Stipanowich brought his strengths as a scholar, thought leader, and speaker to a unique collaboration as the academic co-director of The Straus Institute, serving alongside professor Peter Robinson and operations director Shellee Warnes. Drawing on relationships developed during his CPR presidency, Stipanowich created the Straus Council of Distinguished Advisors, a body of litigation and dispute resolution counsel from from General Mills, ConocoPhillips, BellSouth, DuPont and Georgia Pacific as well as government agencies, respected law firms, and dispute resolution institutions from around the world. He led major national initiatives to develop new Protocols on Expeditious, Cost-Effective Commercial Arbitration and focus on forms of the interplay between mediation and arbitration; spearheaded yearly symposia and conferences, and conducted major surveys of Fortune 1,000 companies, arbitrators, and mediators.

During his tenure as co-director, Stipanowich gave more than 250 presentations throughout the U.S. and on six continents; in 2018, he was a featured commentator in a documentary on dispute resolution in China that drew over 40 million viewers. Meanwhile, drawing on his background as an illustrator and graphic artist, Tom also designed a series of posters and paintings for the Straus Institute that now hang in hundreds of offices all over the world. 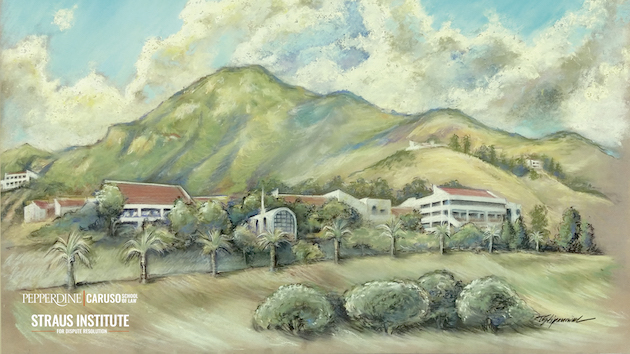 In recognition of his remarkable trailblazing for the field of dispute resolution, Stipanowich has received many honors. He was named a Global Distinguished Faculty Affiliate of Peking University School of Law and a Distinguished Professor of National Law University, Delhi. He received the D'Alemberte/Raven Award from the American Bar Association Section of Dispute Resolution, and CPR's James F. Henry Award, which recognizes "outstanding achievement by individuals for distinguished, sustained contributions to the field of dispute resolution."

"An unblinking commentator on both bad and good trends, Professor Stipanowich is a virtual moderator, guiding and shaping the ongoing 'multilogue' among corporations, academics, governments and neutrals. He has changed the language of [dispute resolution]...No one in the field is more active, to greater effect, than Tom Stipanowich."
-excerpt from a nomination letter for the James F. Henry Award

Return to the Classroom
Stipanowich describes his years working with the faculty and staff of The Straus Institute as "among the happiest and most rewarding of my life." After taking the Institute through a leadership transition while also developing a ground-breaking online academic program, Stipanowich embraces his return to the classroom. Working directly with students on a more consistent basis will return him to his first love, teaching Contracts to first year students.

Stipanowich continues to speak at events that advance and celebrate the important work of dispute resolution scholarship. To join us for Pepperdine Caruso Law's timely symposium, "Presidential Leadership in Times of Crisis" on Thursday, October 29, which will feature Stipanowich's inspirational research about Abraham Lincoln, register here for a link to the Zoom event.