Pepperdine Caruso Law alumnus Stephen Gunson (JD '04), a Los Angeles District Attorney, and third-year student Kelly Shea Delvac, have won an exoneration case under the Conviction Review Unit of the Los Angeles District Attorney's Office. The wrongly convicted man, Derrick Harris, was released after Los Angeles County Superior Court Judge William C. Ryan vacated Harris' conviction, permanently released him from prison, dismissed his case with prejudice, and found him factually innocent of the crimes for which he was convicted. Stephen Gunson was the supervising attorney on the case during the time Kelly Shea Delvac was working at the Conviction Review Unit.

Stephen comments, "I have extremely fond memories of attending Pepperdine Law School. My education there immediately equipped me to be effective at my job as a deputy district attorney for the Los Angeles County District Attorney's Office. I have been working there for the last 15 years. Most of my career has been working as a criminal litigator. I have done about 70 felony criminal trials, most of which were serious or violent cases. However, for the last year and half, I have been assigned to the Conviction Review Unit, a unit that District Attorney Jackie Lacey formed in 2015. The purpose of the unit is to review old cases to see if anyone was wrongfully convicted and, if so, to overturn those wrongful convictions. While wrongful convictions are, at least in Los Angeles County, extremely rare, the system is not perfect. Even if it was only one person serving a wrongful sentence in the county, finding that one case and rectifying that case is extremely important.

"On May 8, 2020, the California Innocence Project submitted a claim of innocence for Derrick Harris, a man that who was convicted of armed robbery in 2013. He was in the process of serving a 15-year prison sentence. I was assigned to work on Derrick's case along with another lawyer, Hailey Singh, and two veteran investigators, David Jones and Victor Pietrantoni. The case immediately caught my attention because the evidence was very weak. I was a little bit surprised that a jury convicted him in the first place. The case hinged mainly on the identification of a single witness.

"After about five months of investigation, we were able to identify a new suspect. The new suspect eventually confessed to my investigators that he was the real culprit. We were unable to prosecute this new suspect because the statute of limitations had run. Nevertheless, we had enough evidence to exonerate Derrick. We submitted a joint habeas corpus petition with the California Innocence Project to the court, which was granted, and Derrick was released on October 6, 2020.

"After I graduated from Pepperdine, I asked my father, a career prosecutor with the Los Angeles County District Attorney's Office for 34 years, whether I should be a defense attorney or a prosecutor. He asked me, 'Why would you want to be a defense attorney?' I said, 'To help the innocent go free.' He said, 'You can do that as a prosecutor.' It turns out that my father was right. Freeing Derrick Harris and watching him reunite with his nine-year-old son was definitely a highlight of my career." 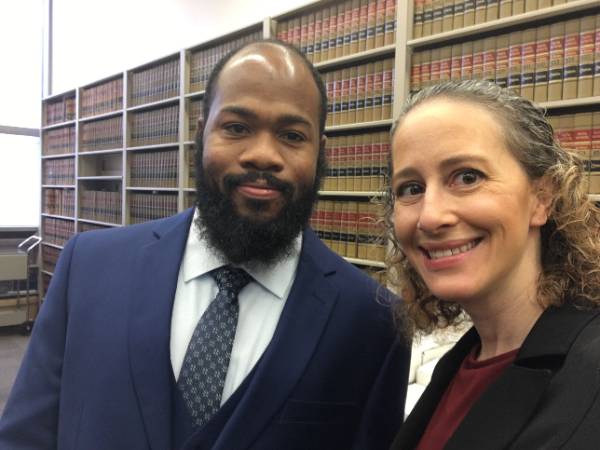