June 10, 2019 | Pepperdine Law Dean Paul Caron has appointed Chalak Richards (JD '12), assistant dean of Career Development, and Jessie Fahy (JD '11), director of Alumni Relations and Employer Outreach, as the new co-directors of the Parris Institute for Professional Excellence, formerly the Parris Institute for Professional Formation. Chalak and Jessie will lead the institute following the departure of Associate Dean Danny DeWalt to serve as Pepperdine University President-elect Jim Gash's vice president and chief of staff. The announcement comes on the heels of a generous endowment gift from Rex and Carrol Parris, the founders of the Parris Institute. Chalak and Jessie will also continue to serve as co-chairs of the Employment Task Force that assists recent graduates to secure post-graduation employment.

Jessie and Chalak graduated from Pepperdine Law in 2011 and 2012, respectively. Both practiced law for several years in nonprofit and immigration law before returning to the law school. Jessie and Chalak were student leaders during their time at Pepperdine Law. Jessie served as the Student Bar Association vice president. Chalak served as Western Regional chair of the Black Law Students Association and was an award-winning member of the Pepperdine Law Trial Advocacy Team.

"One of my favorite aspects of my job the past four years has been running the Preceptor Program of the Parris Institute with Dean DeWalt," said Jessie. "We have grown from 75 preceptors to an anticipated 300 this fall!  It is extremely rewarding to help students navigate their careers, personal life, and professional relationships and I look forward to teaching and leading the next generation of world-changers at Pepperdine Law."

"Pepperdine refined my purpose, increased my ability to serve the broken, and helped me develop as a leader. I am excited about helping this next generation enter their careers with the highest standards of personal and professional excellence through the renowned Parris Institute," said Chalak.

Dean DeWalt commented, "The Parris Institute has completed its first five-year phase by positioning itself as a national leader in the professional formation movement and by winning over the students on its value to their personal lives and professional careers. Now its time to take it to the next level. Jessie and Chalak are the dream team to take it there." 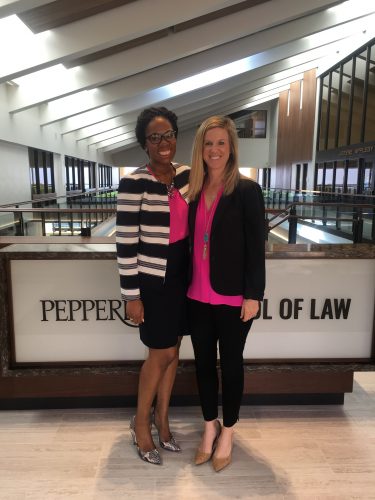