April 8, 2019 | Each spring, Pepperdine Law invites all faculty, staff, and students to nominate outstanding student candidates - those who represent the heartbeat of the school - for the Annual Parris Awards. The Parris Awards honor those third-year students who exhibit the highest order of the pillars of professionalism in all that they pursue, and it was standing room only in the atrium as our community gathered to recognize this exceptional graduating class. Since its inception in 2015, the Parris Institute for Professional Formation has initiated a strategic investment in law students with an emphasis on developing who they are as leaders as much as what they know as lawyers. 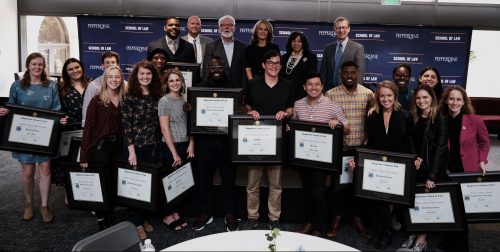 This year's award ceremony was made even more meaningful as Institute founders Carrol and R. Rex Parris were on hand to present each recipient with a framed certificate. 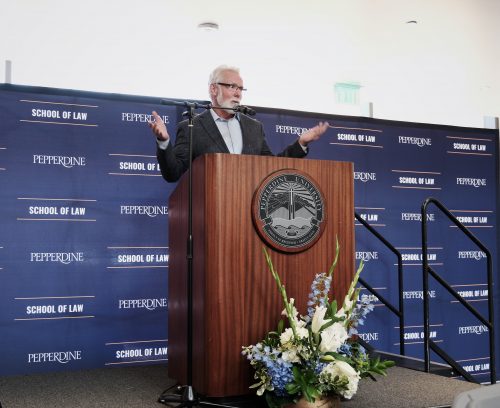 Nominations are based on actual narratives of stories that capture each candidate's attributes. The 2019 Parris Award recipients are:

The 3L who has demonstrated an exemplary commitment to Pepperdine's mission of purpose, service, and leadership 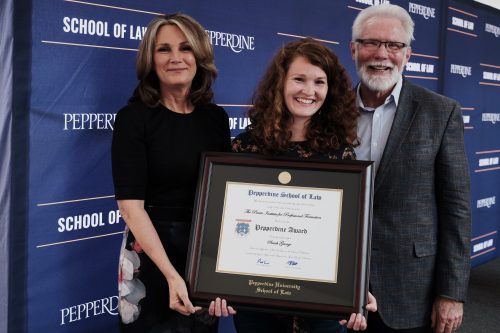 3Ls who have demonstrated exemplary courage facing challenges, fighting injustice, or other circumstance during their tenure at Pepperdine Law

3Ls who have demonstrated exemplary service to a person, family, or community in need during their tenure at Pepperdine Law

The Evan T. Carthen Awards for Inspirational Leadership are named for Evan Carthen who was a member of the Class of 2019. As his class graduates this May, Pepperdine Law commemorated his influence on this graduating class, our students, and our school by presenting his mother and father with a special mark of his time at the law school. Ms. Twillea Evans-Carthen then presented the Evan T. Carthen Award for Inspirational Leadership to three first-year students, one student per law section.