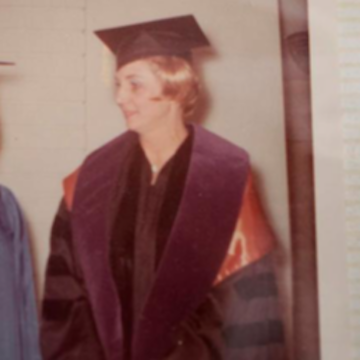 "When I graduated from college, I did intend to go to law school. But in those days, if you were married, being a wife was expected to be your full time job, so I abandoned the law school idea." —LaVerne Bugna (JD '68)

Since 1969 more than 10,000 Pepperdine Law graduates have received degrees and set forth as champions of justice. For fifty years, lawyers, mediators, and entrepreneurs have been trained the Pepperdine way–to serve with purpose, service, and leadership. As we mark this milestone in our law school's history, we will be highlighting the accomplishments and successes of alumni who are Pepperdine, embodying faith and excellence in all that they pursue. What better way is there to kick off a celebration of fifty years of Pepperdine alumni than with a member of the first-ever graduating class?

LaVerne Bugna (JD '68) has been practicing law in Orange County since the first days of Pepperdine Law, when the campus was located in Santa Ana. In the same year that Pepperdine Law marks its golden anniversary, this distinguished alumna will celebrate an anniversary of her own: joining the Centenarian Club.

Five years ago at 95 years young, LaVerne was still doing pro bono legal work in her local Orange County area. She told us, "I wasn't ever interested in financial gain; for me, (my profession) was about helping people that were in trouble and making it less desperate for them."

It was not until she had four teenage children that LaVerne decided to go back to law school. She told us, "I liked it so much...having something to do outside of washing dishes and such." While in the process of earning her Master's degree, LaVerne got the self-described "bug" for law school. While she began her studies at UC Berkeley School of Law and then transferred to UCLA, the commute from Orange County to Los Angeles proved too difficult with a family at home. She enrolled at the Orange University College of Law. In her final year of law school, Pepperdine took over the school, and students were given the option to graduate with either a Pepperdine or Orange University degree. She chose Pepperdine for her credentials, noting the school's well-known reputation across Southern California.

Over the span of her career, LaVerne has witnessed substantial advancement for women in the legal industry. When she began her studies at Berkeley Law, 12 of the 350 members of her law class were women. Today, exactly half of the Pepperdine Law student body is comprised of women.

Since Laverne earned her degree in the 1960s, Pepperdine has risen further and faster than any other private law school in the country, and we are just getting started. As Dean Paul Caron has often remarked over the past year, Pepperdine Law is "on the rise" thanks to alumni like you. We look forward to celebrating 50 years of Pepperdine Law through 50 outstanding graduates from the last 50 years and meet those who will send us into the future.