"Although I had over 10 years of mediation and ADR practice before coming to Pepperdine, the LLM program at the Straus Institute for Dispute Resolution truly enabled me to raise my skills and academic education to new levels."

After completing the LLM program, Nedic immediately received an offer to consult on an EU-funded judicial reform project in Serbia, to advise the Supreme Court of Serbia, and to assist the Ministry of Justice in improving the mediation system of the country.

In addition, Nedic was named Senior Fellow at the Weinstein International Foundation where he works through a global network of ADR-trained dispute resolution professionals to promote conflict resolution through mediation and other dispute resolution practices. In this role, Nedic further promotes mediation education and training while also helping communities manage local, regional, and cross-border, non-commercial disputes related to public interest.

Nedic recently returned from Paris where he served as a judge and mediator at the ICC Mediation Competition. Nedic is renowned in his field and clearly possesses the cultural fluency skills demanded of a successful international mediator. This week we shine the spotlight on an alumnus who epitomizes the Straus Institute's mission to identify conflicts of societal significance and expand dispute resolution skills for the advancement of conflict settlements worldwide!

What steered you into the legal field? More specifically, what led you to mediation?

When I completed my first Masters degree in London, UK, I returned to Serbia in 1996 and started working as an attorney. In 2002, I was hired as a legal counsel for the USAID funded legal reform project implemented by ABA ROLI (American Bar Association, Rule of Law Initiative). While working for ABA ROLI, I attended a conference on a "novel dispute resolution technique" with a strange name of mediation . During this conference, I was introduced to a whole new professional world. Afterwards, I became what you would call a "converted attorney" - a fierce litigator converted into a peaceful mediator. Since then, I focused my entire career on mediation and peaceful dispute resolution. I received my first mediation certificate in 2006 from the ADR Group in the UK, and have been working and specializing in the mediation field ever since.

Is there someone who played a mentor role for you while studying at the Straus Institute?

Professor Thomas Stipanowich was officially my academic advisor for the program, and he was a great mentor and an amazing professor. I came to Straus with very little knowledge about arbitration, and I left with a full bag of tricks. I also received tremendous guidance and direction from other Straus professors – Robinson, Singh, Blondell, Park, Birk, Rottman – who all unselfishly shared their knowledge, experience, as well as time to help me absorb all the information and put my newly acquired knowledge into practice.

What do you hope to see for the next fifty years of Pepperdine Caruso Law school?

Pepperdine Caruso Law School has already achieved a lot, I am sure it will grow even more to expand its reach and educate at least 50 more generations of top legal practitioners. (I anticipate that) the Straus Institute will continue its pioneering work of educating and enabling legal practitioners around the world to resolve disputes peacefully, for the benefits and in the best long term interests of their clients, individuals, private, and public entities alike.

Nedic concludes by saying that although the his experience of the Malibu campus was second to none, he hopes that Caruso Law and Straus will work to expand their reach and offer courses in several other locations on even on other continents, utilizing both modern online technologies, as well as local talent and Pepperdine alumni around the world.

For more information on the Master of Laws (LLM) Programs at Pepperdine Caruso Law, we invite you to explore our website. 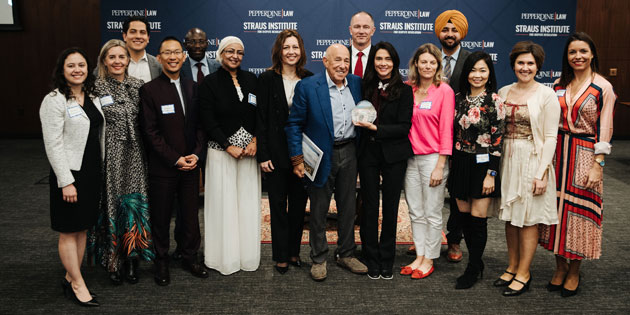