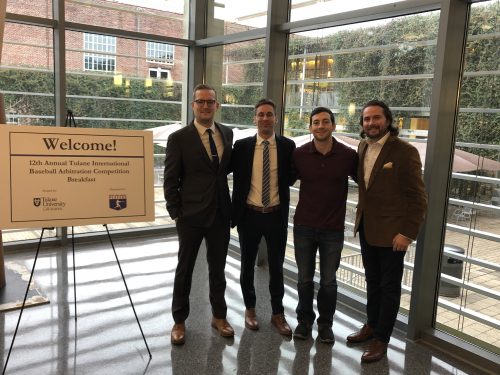 The Tulane International Baseball Arbitration Competition, run by the Tulane Sports Law Society, is a simulated salary arbitration competition modeled closely on the procedures used by Major League Baseball (MLB). Like most law school moot court competitions, TIBAC's main goal is to provide participants with the opportunity to sharpen their oral and written advocacy skills. However, the competition is unique in that it allows law students to sharpen these skills within the specialized context of MLB's salary arbitration proceedings.

In the 2019 quarterfinals (top 8 teams), Pepperdine Law had a rematch against Brooklyn Law School, and this year won the round, advancing to the semi-finals. The arbitrators for the round were Jon Fetterolf, Marc Kligman (Player Agent, Total Care Sports Management), and Jay Cohen (Staff Attorney, Zuckerman Spaeder and Website Founder, Fantasy Sportonomics).

In the semi-finals, the Pepperdine Law team was rematched against the Fordham team from the first round that was defeated, but Pepperdine did not advance on a point margin of only five points. Rex Gary (Partner, Turner-Gary Sports), Scott Barber (Player Agent, Ballengee Group), and Adam Cromie (Mergers & Acquisitions Associate at JONES DAY® and former Assistant General Manager and Vice President with the Washington Nationals) were the arbitrators.

The 12th Annual TIBAC was the 10th appearance for Coach Jeremy Evans (three as a competitor and seventh as a coach). Calvin Jonker competed last year with Dan DaSilva, 3L, and Nolan Dilts (Student Coach).  Andrew Jung was the newest member to the team and performed excellently. Jonker also placed second with Jeremy Evans at the 2018 UCLA/Villanova Sports Case Competition. Evans, an alumnus of the inaugural Pepperdine Law Entertainment, Media, and Sports Master of Laws (LLM) and current MBA candidate at Pepperdine Graziadio Business School, in addition to running California Sports Lawyer®, was recently hired as the Project Manager to Pepperdine University Institute for Entertainment, Media, and Sports (IEMS).  Pepperdine Sports Law Professor Maureen Weston gave the team her blessing and continues to strongly support the efforts of her excellent students.  The efforts of Jonker, Jung, and Dilts cannot be overstated-they worked hard, and their performance is proof of such.

The 2019 Pepperdine Law team not only competed successfully at a high level, but they obtained great new experiences and networked with a large contingency of sports professionals.