On Saturday, May 22, members of the Pepperdine Caruso Law Class of 2020 joyously gathered at Alumni Park for a long-awaited celebration of their commencement after completing their legal education a year ago in separation from their friends and colleagues. Over 300 candidates graduated from Caruso Law in the 2019-2020 academic year, receiving Juris Doctor, Master of Laws, Master of Dispute Resolution, and Master of Legal Studies degrees. Graduates who were able to return to Malibu were delighted to be reunited for the commencement ceremony on a magnificent day.

The 2020 ceremony opened with Luke Manzo offering an invocation and leading the Pledge of Allegiance, which was followed by a recording of Marcy Kuo performing the National Anthem.

Manzo delivered the student address in which he thanked his classmates for coming together during difficult times, remarking, "At Pepperdine I found uncommon kindness and friends of uncommon character. I found cooperation and encouragement, and a community of people willing to come alongside each other to grow and love, and lift each other up."

Pepperdine University President Jim Gash then presented the Distinguished Alumnus Award to Virginia Milstead, Class of 2004, and member of the Pepperdine University Board of Regents. Milstead is a partner at Skadden, Arps, Slate, Meagher & Flom. Milstead shared three pieces of advice with the graduating class that would be applicable to their lives and law practice. "First, hard work beats talent when talent does not work hard. Second, regardless of whether you're at fault, you're responsible. Third, if it feels good to write it, you probably shouldn't," she said. "So, in sum, work hard. Accept responsibility. Be nice." Milstead's remarks resonated with the class of 2020, many of whom have already taken and passed the bar exam, and began practicing law in the year since they earned their juris doctor degrees. 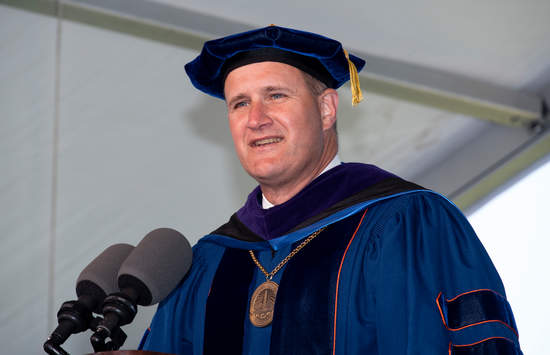 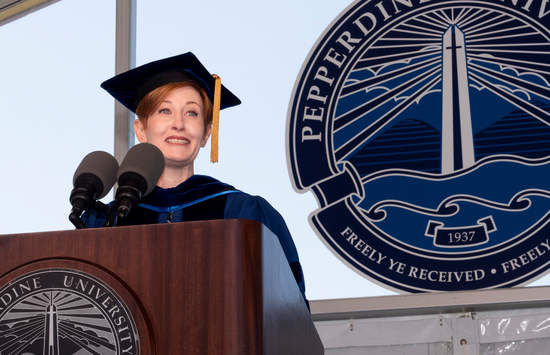 The commencement speaker, Honorable Consuelo Callahan of the United States Court of Appeals for the Ninth Circuit, was introduced by Board of Advisors and Class of 2001 member, James Azadian. Azadian, who served as a law clerk to Judge Callahan, recounted her many singular achievements and commended her to the graduates by saying, "As you step forward into the legal profession, my wish for you is that you set an elevated tone of dignity, as Judge Callahan has done, and that each of you has a life and career as full as hers."

Judge Callahan then took the podium saying that one of the best parts of her profession is getting to wish graduates well as they chart their own destinies. She advised the graduates, "Be the Pepperdine lawyer you have been trained to be. Do live a life of purpose, service, and leadership. Do see value in yourself and every person that crosses your path. Set goals for yourself and don't let the non-believers define your future. Know that hard work and determination are essential to your success." 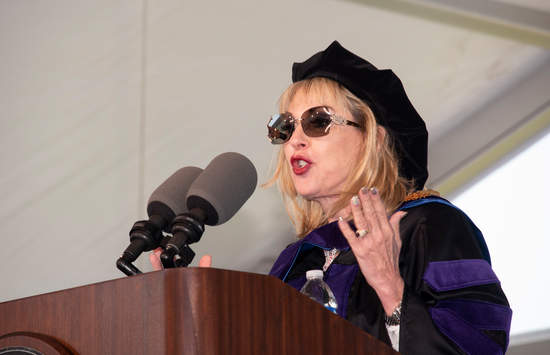 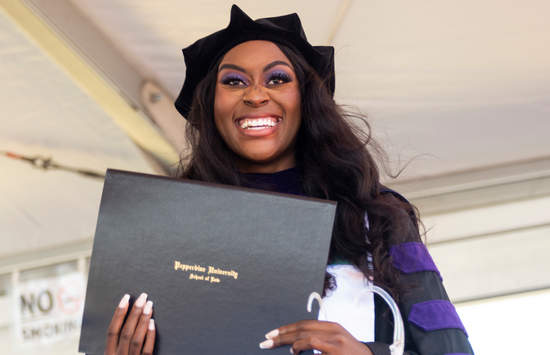 Dean Paul Caron followed the commencement address with the presentation of candidates for graduate degrees, which were conferred by President Gash. After the graduates in attendance processed across the stage to collect their degrees, classmates who could not attend were recognized in absentia. The jubilant and stirring ceremony was then concluded with a benediction delivered by Chalak Richards, Assistant Dean of Student Life, Diversity, and Belonging and member of the Class of 2012.

Pepperdine Caruso Law congratulates the Class of 2020 for their exceptional camaraderie and accomplishments amid a year of extraordinary challenges.

You can view the complete Caruso School of Law Commencement on YouTube.