Pepperdine Caruso Law alumna Nicole Geiser (JD '21) and third-year JD/MDR student Tatum Lowe have won the semester-long ILC Cup sports arbitration and moot competition. The competition was sponsored by the law firm Ingles Laurel Calderon, which is the leading sports law firm in the Philippines. The competition began in January and concluded with the final championship round on July 29th.  Initially scheduled for early July, the final round was postponed until the day after the California Bar Exam.

For the elimination, semifinal, and championship rounds, the Caruso Law team was provided with a new problem involving different areas of sports law, including player conduct, violation of eligibility and safeguarding policies in the player's contract, and doping violations. For each round the team had to submit a written portion called the memorial and then conduct oral arguments.

The final round and overall results for the Caruso Law team were: 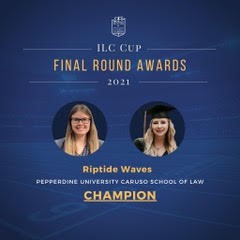