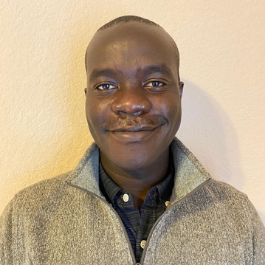 Meet Francis Ojok (LLM '22), a Ugandan trained lawyer currently serving as the Sudreau Global Justice Institute Summer Justice Fellow while working to complete his LLM at Pepperdine University Caruso School of Law. Francis is a brilliant advocate with a contagious and permanent smile on his face, but if you knew his story, you might wonder how that is possible.

Francis was born in the Northern Ugandan District of Gulu in the midst of a brutal civil war. As a child he watched his own village get burned down by Joseph Kony's Lord's Resistance Army (LRA) rebels, and witnessed his mother and grandparents being attacked and his sister's abduction. He would later learn that his sister died while in LRA captivity. The war forced him and his remaining family into an Internally Displaced People (IDP) camp. He spent his childhood walking every night to sleep in hospitals to avoid being abducted and turned into a child soldier or killed. He spent most of his life going to bed without the hope of waking up the next morning alive.

Against the backdrop of war Francis, had the choice to either hate or to love; to seek revenge or to forgive; to accept war, killing, and mass violations of human rights as the norm for his country, or to transform his anger and frustration into a passion that would drive him to inspire change in his community and to the world. Inexplicably, Francis chose love, forgiveness, and restoration. Over a decade later, Francis finds himself happily married and living out his dream of becoming a human rights lawyer fighting for justice and peace everywhere he goes.

Francis spent some time reflecting on his remarkable journey from war-torn northern Uganda to Malibu, California, where he is working to expand access to justice across Africa with the Sudreau Global Justice Institute. Francis put his reflections on paper for you to read below in his short essay, "Unknown Journey to Pepperdine and the Sudreau Global Justice Institute."

My journey to Pepperdine and the Sudreau Global Justice Institute has not been an easy one. But that hardship reminds me to be grateful every day for how far I have come and for the opportunities to impact the world that I now have at my fingertips.

Growing up in a war-torn area, I spent much of my life fearful and uncertain if I would wake up the next day alive. I spent years watching myself and my people stand at the mercy of Joseph Kony and his LRA rebels, the military, and the disease and hunger that would sometimes spread more quickly than violence in the internally displaced camps that were meant to provide us with safety.

One place I found refuge was at school. School was a place where I could laugh with friends and peers who were experiencing the same hardships I was. Together, we carried the complex and contrasting emotions of a childhood lived in the shadow of war. At school, my eyes were opened to the heroes who had come before me and took a stand against the violence in their own communities and societies. It was because of my educational journey that I made a commitment to myself, the first one in my family to complete secondary school, to use this privilege for the betterment of my community.

After spending my most formative years watching senseless violence tear apart lives, families, communities, and entire ethnic groups, I became determined to become a lawyer and to fight for equal protection under the law for all regardless of one's political, social, or economic status. I want to hold accountable perpetrators of human rights abuses, war crimes and crime against humanity; to inspire reconciliation and healing for communities who had been victimized; and to break these cycles of violence in exchange for pathways toward peace.

After doing what seemed like the impossible in my life, completing a Bachelor of Laws in Uganda, and achieving my dream of working at a law firm in Uganda's capital city, Kampala, I found myself both proud of my accomplishment and, at the same time, feeling unfulfilled by the work I was doing. I was not spending my days fighting for those who had been marginalized or oppressed; I was not breaking cycles of violence and working toward peace; I was not promoting reconciliation that I believed would foster long-term healing. It was in this low and lost moment that a friend handed me a book written by Pepperdine's President Jim Gash called, Divine Collision: An African Boy, An American Lawyer, and Their Remarkable Battle for Freedom. I was inspired and challenged by the spirit of humanity that drove President Gash thousands of miles away from his home to pursue freedom and justice for Ugandan youth.

His book motivated me to start a non-profit, the Kuponya Peace & Justice Initiative that is envisioned to pioneer an innovative legal framework to interrupt the cycle of violence in Uganda by creating bridges whereby both traditional and modern justice systems can coexist and ultimately create holistic, sustainable justice in Uganda.

I knew that to deepen my ability to make an impact in my community through Kuponya, I would need more knowledge and experience. I dreamed of the opportunity to one day join Pepperdine University and the Global Justice Initiative highlighted in President Gash's book. While the road was rocky, I kept that dream and hope alive and I am now a proud student of the Straus Institute for Dispute Resolution and a Global Justice Fellow at the Global Justice Initiative where I have had the chance to work alongside amazing people advancing access to justice in countries around the world, including my own country Uganda.

I am ever grateful for the opportunity to fulfill my dream and work toward a more just and peaceful world.