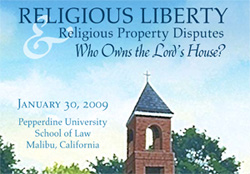 Cochran, the Louis D. Brandeis Professor of Law and director of the Nootbaar Institute on Law, Religion, and Ethics, has written extensively on faith and law and is the conference director. "We live in a time of uncertainty about the status of religious liberty," he said. "Courts have ordered religious hospitals and medical personnel to offer services that violate their religious beliefs. Sex abuse cases call into question whether courts can defer to church supervision of clergy, and religious organizations that require employees to share their religious commitments are charged with employment discrimination. At this conference, we considered the status of religious liberty in the United States."

The conference also examined recent developments in church/state law and their implications for church property and other disputes.