Nootbaar Endowment | Pepperdine Caruso School of Law Skip to main content
About the Herbert and Elinor Nootbaar Institute on Law, Religion and Ethics

The Institute on Law, Religion, and Ethics, was named after Herbert and Elinor Nootbaar on November, 8th, 2008, the occasion of Herb’s 99th birthday. 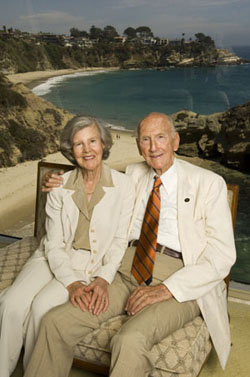 The Nootbaars’ connections to Pepperdine reach back more than fifty years, when they interacted with past Pepperdine President Norvel Young and his wife, Helen.

In reconnecting with Pepperdine through Helen Young and her daughter Sara Jackson, vice chancellor for major gifts at the University, Elinor and Herb made a generous $6 million gift to the Caruso School of Law to endow the Nootbaar Institute on Law, Religion, and Ethics; the Dean’s Office; and to support the William French Smith Memorial Lecture Series. They have since given an additional $4 million to further support the work of the Nootbaar Institute—making them among the most generous couples in the law school’s history.

“The better we came to know Pepperdine University, its people, and its values, the more we felt the answer was in that direction,” said Elinor in an article in Pepperdine Law. Upon learning about Pepperdine’s Institute on Law, Religion, and Ethics, they felt it was a perfect fit. “When we realized the extent of the institute’s work and the programs and mission, we were so inspired and wanted to help,” said Elinor.

The endowment of the Nootbaar Institute has enabled further investigation of law, religion, and ethics through interdisciplinary seminars, conferences, and symposia. The endowment has also strengthened Pepperdine’s Global Justice Program, which is housed in the Nootbaar Institute. Among other initiatives, the program gives students the opportunity to work with human rights organizations both nationally and internationally providing stipends for students pursuing international human rights work across the globe.

The Pepperdine Community mourned the passing of Elinor in the spring of 2011; Herb remains a steadfast friend and supporter, and celebrated his 107th birthday in November 2015.