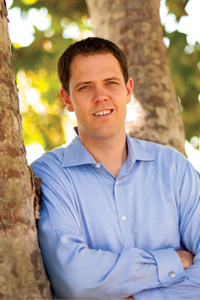 John Niemeyer’s decision to attend Pepperdine took place nearly half a world away from Southern California. He was serving as country director for Restore International Ltd. in Kampala, Uganda, when he encountered the faculty and students behind Pepperdine’s Global Justice Program.

“Professor Jim Gash and (then) Vice Dean Perrin had huge impacts on my perception of what law school entailed,” recalls Niemeyer, who is now a Dean’s Scholar at Pepperdine. “I saw in them, and in the students who traveled to Uganda, a school that was focused on more than just accolades. Pepperdine is a school that values service.”

As a research assistant, Niemeyer is working with Professor Gash in the creation of a book on Pepperdine’s work in Uganda. Niemeyer is also a member of the Pepperdine Law Review and the Interschool Moot Court Team. During his tenure with Restore International, Niemeyer launched the Restore Leadership Academy, serving more than 250 high school students, and formed two rehabilitative homes for girls rescued from human trafficking. He also aided the honorary consul of Uganda to the U.S. as a representative in discussions on child trafficking.

“The Pepperdine students working in Uganda were intelligent and driven, and they were using their abilities to help others. I knew that if I were to go to law school, I’d want to be in whatever environment produced them,” says Niemeyer. He also credits Pepperdine faculty for their active involvement in their students’ welfare. “Students spend hours in professors’ offices talking about anything from the subject matter of the class to deep, personal, life decisions. That makes Pepperdine’s faculty quite unique."