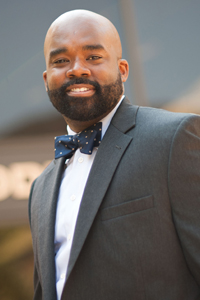 Having an eclectic background as a salesman, a basketball coach and mentor for inner-city youth, and a television actor, John Adams decided to pursue a legal education in order to do something that would have a lasting effect on his family, his culture, and his country. “In a word, ‘legacy’ is the reason I decided to enroll in law school,” says Adams, a graduate of The Master’s College.

During his time at the Caruso School of Law, Adams has been involved as a member of the trial teams, the Christian Legal Society, and the Black Law Student Association. He also has served as a judicial intern with the Los Angeles County Superior Court of California and as a law clerk for the Los Angeles County District Attorney’s Office in the Hardcore Gang Unit. Adams’ work experience speaks to his goal of becoming a prosecutor for a Southern California district attorney’s office after graduation.

Adams was drawn to Pepperdine because of its commitment to service. “The law school and its students emanate a desire to help others by using the law,” says Adams. When making his decision of where to attend law school, Adams explains, “I never felt pressured to choose Pepperdine. The people revealed the spirit of the school, and the decision made itself. I don’t know how I could have made any other choice."