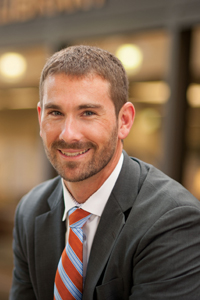 As a fire support and information operations officer serving in Afghanistan, Joe Cardosi witnessed the struggles of a nation fighting corruption and lawlessness. A former U.S. Bureau of Labor Statistics economist, Cardosi joined the U.S. Army in 2007 out of a sense of patriotic duty. When he returned stateside, he realized he had a different calling.

“Seeing such a broken and corrupt system in Afghanistan made me appreciate our legal system in the U.S. I wanted to be a part of maintaining and improving it,” says Cardosi.

Cardosi graduated magna cum laude with a bachelor’s degree in economics and international affairs from Florida State University. He completed Army Officer Candidate School at Ft. Benning, Georgia, in 2008 and deployed to Afghanistan the following year, where he was awarded a Bronze Star Medal for actions in combat. During his time at Pepperdine, Cardosi has served as lead articles editor for the Pepperdine Law Review and has interned for the U.S. Attorney’s Office in its National Security and Narcotics Section. He was a judicial extern for the chief judge of the U.S. District Court for the District of Columbia and a summer associate for the law firm Jones Day.

One of the most rewarding aspects of Cardosi’s experience at Pepperdine has been the focus on values such as service and leadership. “The Caruso School of Law’s values are very similar to those I lived by in the military,” says Cardosi. “There is a stereotype of lawyers as selfish and immoral. It’s refreshing to be part of a community that is focused on fostering the personal and professional integrity that is necessary to be a leader in this noble profession.”