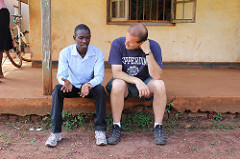 A preview screening of REMAND, an upcoming Revolution Pictures documentary about the work by Pepperdine Law's Global Justice Program in Uganda, will take place on Saturday, November 21, 2015, at the Aero Theatre in Santa Monica, California. Registration is now open for the screening and for the Producers' Dinner, which will feature Baylor University president and former Pepperdine Law dean Kenneth W. Starr, film director Andy Reale, executive producer Janet Kerr, Global Justice Program director Jim Gash, and many of the students who participated in the prison project featured in the film.

This is a film about the power of an idea. A simple suggestion made by two Pepperdine law students led to deep and systemic changes in the Ugandan criminal justice system and benefited thousands of people, including several prisoners desperate for justice whose powerful stories are told in this film. Viewers will look deep into the faces of despair through the eyes of twelve law students as they meet these prisoners in their darkest hours. Watch as the story unfolds and leads to dramatic change in the criminal justice system of an entire country in the wake of our work. 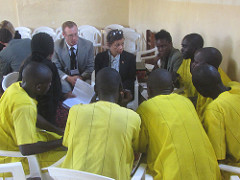 The announcement of the film's completion and preview screening follows a successful crowdfunding campaign during mid-2015 to raise $150,000 for a followup to the film's original content. The additional footage follows several prominent attorneys who travel to Uganda in the summer of 2015 and experience recent developments in the Global Justice Program's continuing work with the Ugandan court system. The attorneys' experience was also covered by the Daily Journal ("Federal Judge, Appellate Justice Help Ugandan Judiciary Understand Plea Bargain: Trip to Africa Included District Judge Beverly Reid O'Connell and Justice Tricia Bigelow," August 31, 2015).