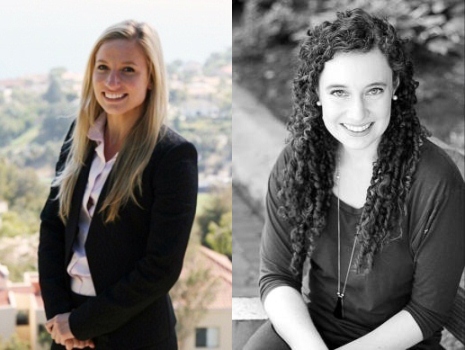 Today the Ninth Circuit Appellate Clinic at Pepperdine School of Law posted its fourth victory out of five appeals argued since the clinic was launched in 2013. Then-students Sarah Gerdes (JD '15) and Katelin Eastman (JD '15) briefed and argued the winning appeal. The win was a published opinion in Escobedo v. Apple American Group.

"We are so grateful to the judges of the Ninth Circuit who give our students this remarkable opportunity to experience appellate litigation and client service at the highest levels," says Dean Deanell R. Tacha, dean of Pepperdine Law and former Chief Judge of the Tenth Circuit Court of Appeals. "We are proud that these outstanding Pepperdine students are serving their clients and the court so successfully."

"A significant effect on future cases"

The clinic represented Maria Escobedo in her appeal from the dismissal of her Title VII lawsuit against her employer for wrongful termination after she complained to the EEOC about sexual harassment. Ms. Escobedo represented herself pro se in the district court and lodged her complaint along with a request to proceed without paying a filing fee because her sole source of income was her $210 weekly unemployment payments. The district court found that she should be able to pay the $350 filing fee because her husband also had social security income. The district court then dismissed her lawsuit after she paid the filing fee because it found that the complaint was then untimely. The Ninth Circuit reversed, holding first that the complaint was timely when it was presented to the district court even though it was not officially filed until much later when the filing fee was paid. The Ninth Circuit also found that the District Court abused its discretion in denying Ms. Escobedo’s request to proceed in forma pauperis because her income was too low and it was wrong to consider her husband's income.

"This is another example of the great work Pepperdine Law students have been performing on behalf of clients in the Ninth Circuit," says clinic director Jeremy Rosen. "Not only is this case important for Ms. Escobedo, as she will now be able to proceed with her lawsuit, but this opinion will have a significant effect on future cases. Until now, there has been no published guidance from an appellate court regarding when a pro se litigant can qualify to proceed in forma pauperis. This has led to divergent views by individual district judges about who qualifies for a waiver of the filing fee. Today, the Ninth Circuit has made clear what the outer income limits are. This should make the process of deciding in form pauperis petitions more uniform throughout the Circuit."

Caruso School of Law
Academics
Awards and Achievements
scroll up
©