Since its founding more than 50 years ago, the Caruso School of Law has prepared its students not only to practice law, but to use their legal expertise to serve their communities. Through the historic 2019 naming gift from alumnus Rick Caruso (JD '83)—himself a dedicated public servant through both his philanthropy and his work on numerous Los Angeles civic boards and committees—the school reinforced its commitment to those ideals, dramatically increasing scholarship funding and providing loan forgiveness for graduates who practice public interest law, and increasing support for the faculty who teach and prepare their students for lives of service.

At the 2023 Caruso School of Law dinner, we will celebrate Caruso Law's legacy of service and look toward an even more prolific future, with the help of distinguished guest George W. Bush, the 43rd president of the United States. We will celebrate the multigenerational legacies of President Bush and Rick Caruso, both of whom exemplify the values of selfless service to which our students, alumni, and people throughout the Caruso Law community can aspire. 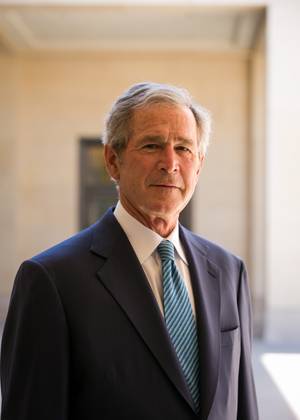 George W. Bush served as 43rd president of the United States of America from 2001–2009. As commander in chief, President Bush worked to expand freedom, opportunity, and security at home and abroad. At home, he championed the No Child Left Behind Act to raise standards in schools and cut taxes for every federal income taxpayer, restoring economic growth and launching an unprecedented 52 straight months of job creation. The Bush Administration also negotiated new free trade agreements, worked with Congress to pass landmark healthcare reforms, and instituted robust environmental protections.

Following the terrorist attacks on September 11, 2001, President Bush responded with a comprehensive strategy to protect the American people. Under his leadership, the United States built global coalitions to remove violent regimes in Afghanistan and Iraq that threatened America and provided unprecedented support for young democracies and dissidents around the world. President Bush also launched global HIV/AIDS and malaria initiatives that have saved millions of lives, particularly in sub-Saharan Africa. Prior to serving as president, he was the 46th governor of Texas from 1995–2000.

President Bush is the author of three bestselling books: Decision Points (2010), 41: A Portrait of My Father (2014), and Portraits of Courage: A Commander in Chief’s Tribute to America’s Warriors (2017). He and Laura are the parents of twin daughters: Barbara, married to Craig Coyne, and Jenna, married to Henry Hager. The Bushes also are the proud grandparents of Margaret Laura “Mila”, Poppy Louise, and Henry Harold “Hal” Hager.