"Intercountry adoption seems so simple from the outside," says Robert L. Ballard, an associate professor in the Seaver College communication department. "People think, Why not? But then you peel back the layers and find complex problems and multiple viewpoints on issues of ethics, identity, and culture."

In a unique cross-discipline collaboration, four Pepperdine University professors have examined those difficulties and produced new insights in the form of a book. The Intercountry Adoption Debate: Dialogues Across Disciplines, published by Cambridge Scholars in 2015, spans multiple countries and religious and cultural perspectives and brings together the voices of scholars, adoptees, adoptive parents, birth parents, and professionals in one volume. Ballard served as lead editor and partnered with three Pepperdine School of Law professors – Naomi H. Goodno, Robert F. Cochran, and Jay A. Milbrandt – to edit the volume.

"The law professors brought different expertise, sharpened my writing and perspective, and were wonderful to work with. We all had our positions and had debates along the way," Ballard said. "This kind of collaboration was like a gift dropped from the sky."

Ballard was uniquely positioned to help bring together the various perspectives. Ballard was adopted at three weeks old through Operation Babylift, the mass evacuation of Vietnamese children to other countries at the end of the Vietnam War in 1975.  He is also an adoptive parent, having adopted a son from Vietnam.

"I know what it's like to be separated from my culture. I also know what it's like as an adoptive parent trying to strive for an ethical adoption," Ballard said. "I can see both sides. I take a very moderate position. I believe that intercountry adoption is overall a good thing but I also believe that not every child that can be adopted should be adopted. We have to take a look at it from a child-by-child, country-by-country basis." 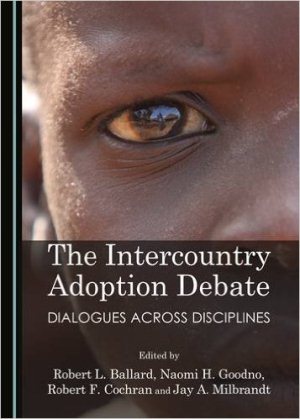 Working with three law school professors provided Ballard with fresh perspectives on intercountry adoption. Goodno is associate professor and director of the Byrne Judicial Clerkship Institute; Cochran is the Louis D. Brandeis professor of law and founder and director of the Herbert and Elinor Nootbaar Institute on Law, Religion, and Ethics; and Milbrandt is an assistant professor at Bethel University, Minnesota, and senior fellow in global justice with the Nootbaar Institute. The editors and contributors to the volume have personal and professional connections with children who have been orphaned, abandoned or relinquished, Ballard said. Their various experiences occasionally led to disparate opinions regarding how best to help children separated from family, leading in turn to spirited discussions on topics such as whether it is best to provide support to children in their home countries or adopt them and bring them to more developed nations. Ultimately, the four editors enjoyed their collaboration so much that they are discussing possible future joint projects.

Ballard first had the idea to bring together people on all sides of intercountry adoption about eight years ago when he was a professor at the University of Waterloo in Canada. He co-chaired the 2010 Intercountry Adoption Summit in Ontario, Canada, and continued conducting research on intercountry adoption after joining Pepperdine in 2011. Ballard helped organize the 2013 Nootbaar Institute conference entitled "Intercountry Adoption: Orphan Rescue or Child Trafficking?"

"It was a great conference. We had well-known scholars from many disciplines with many discussions about the positives and negatives of intercountry adoption," Ballard said.

The book includes writings from top scholars in law, medicine and health, social work, anthropology, religion, sociology, and history, as well as perspectives from parents, policymakers, adoptees, and agency representatives. Contributors hailed from a number of countries including Ethiopia, South Africa, Australia, Sweden, Canada, Haiti, England, and the United States. The authors hope that the various issues and viewpoints presented in the book will result in stronger policies that protect children, birth parents, and adoptive parents. One of the highlights of the volume is the exploration, for the first time in such detail, of the range of religious perspectives on intercountry adoption from contributors representing many faiths.

"The religious perspectives – the pros and cons, the biblical basis – were quite fascinating to me, and a wonderful addition to the literature," Ballard said.