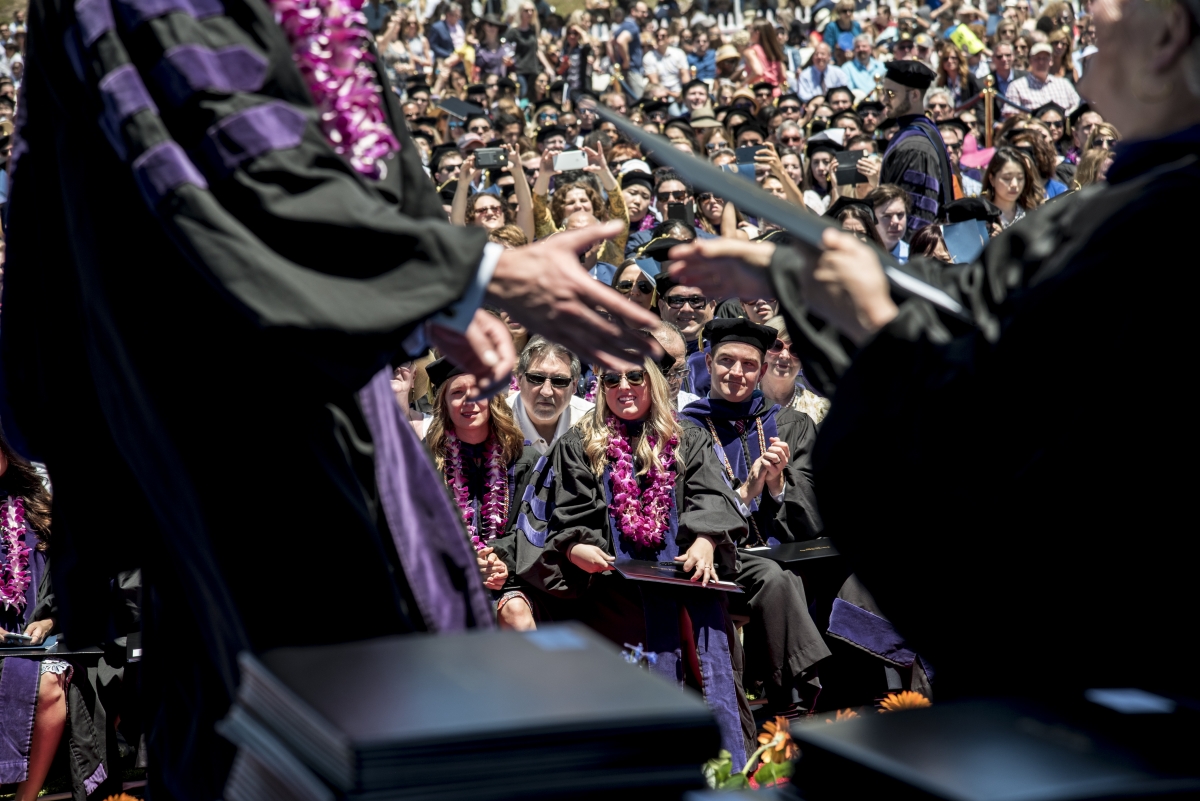 On Friday, May 19th, Pepperdine School of Law welcomed family and friends to Alumni Park for the Class of 2017 commencement ceremony. Graduation embodies a tradition steeped in the nexus of academia, law, and faith and indicates the beginning of a greater and even more significant journey in each of the graduates' lives. This year, 283 graduates received degrees from Pepperdine Law, including 221 Juris Doctor (JD), 30 Master of Laws (LLM), and 32 Master of Dispute Resolution (MDR) students.

The ceremony, situated between what Jessica Freitas (JD ’17) described in the Invocation as the majesty of the ocean and mountains, was graced by a magnificent Malibu day. Cory Batza (JD ’17) led the crowd in the Pledge of Allegiance followed by Brooke Bergen’s (JD ’17) bold rendition of the National Anthem. Then, in one of her final acts as Duane and Kelly Roberts Dean and Professor of Law, Dean Deanell Reece Tacha proudly introduced Amber Kruggel as the elected student speaker. After citing an extensive list of accomplishments, Dean Tacha went on to describe Kruggel as someone who represents everything that is great about Pepperdine law students. Kruggel relayed a message of gratitude back to the faculty, families, and her fellow graduates and said, “I have complete faith that we will change this world one act of service at a time.”

Following the Student Address, Alexander Caruso (JD ’17) presented the Young Distinguished Alumnus Award to Jerren Wright (JD ’09), Corporate Counsel for Amazon Studios. Wright concurrently completed his JD and certificate in dispute resolution at the Straus Institute before earning his MBA from the Graziadio School of Business and Management in 2011. In addition to his legal appointments and consulting work, Wright is involved in a number of philanthropic organizations, including Big Brothers Big Sisters Los Angeles and the Vista del Mar Leadership Advisory Board. Rick Caruso (JD ’83) then presented the Distinguished Alumnus Award to his friend and classmate Michael Quigley (JD ’83). Quigley, an attorney at South Korea’s largest legal firm, Kim & Chang, boasts extensive tax litigation experience, and his legal advocacy skills are widely recognized by his peers. Imparting a message of hope and confidence, Quigley assured graduates that their Pepperdine education has equipped them to serve as the leaders and peacemakers the world so urgently needs. “You made a brilliant and wise choice–there has never been a better time to be a lawyer.”

Chancellor Michael Adams then presented the 2017 Candidate for Honorary Degree to Michael Boone, partner and cofounder of Haynes & Boone, one of the most respected law firms in the United States. Boone, who has focused much of his philanthropy towards the mission of higher educated, delivered this year’s commencement address. He acknowledged the weight carried by a Pepperdine law degree and urged graduates to advocate and fight without ever surrendering the qualities of dignity and respect. Following Boone’s address, the graduate degrees were presented to candidates by University President Andrew K. Benton.

This year’s graduates embody the academic devotion and communal personality of the Pepperdine School of Law. Speaker Michael Boone closed his speech by promising graduates, “Your reputation for integrity will be your most important credential.” Professors, counselors, advocates, and other members of the Pepperdine School of Law community are proud to see this year’s class set forth to walk humbly and serve others with grace and integrity.