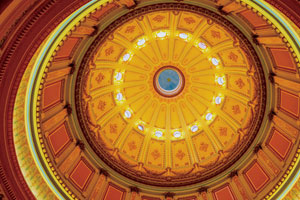 Pepperdine University will host the 44th Annual School of Law Dinner at The Beverly Hilton hotel on Friday, March 3, at 6 PM.

Governor Brown was elected trustee for the Los Angeles Community College District in 1969, secretary of state in 1970, and governor in 1974 and 1978. As governor, he helped create millions of jobs, strengthened environmental protections, and promoted renewable energy. After his governorship, Brown lectured and traveled widely, practiced law, served as chairman of the California Democratic Party, and ran for president.

In 1998 Brown was elected mayor of Oakland and helped revitalize its downtown neighborhood as well as reduce crime, while also founding two high-performing charter schools. He was elected California Attorney General in 2006, and worked to protect consumers, pursue mortgage fraud and real estate scams, champion workers' rights, and crack down on violent crimes.

Brown was elected to a third gubernatorial term in 2010, and to a historic fourth term in 2014. Since returning to the Governor's Office, he has helped eliminate the state's multi-billion dollar budget deficit, spearheaded successful campaigns to provide billions in new funding for California's schools (Proposition 30), and established a robust Rainy Day Fund to prepare for the next economic downturn (Proposition 2).

Under Brown, California has cut its unemployment rate in half and added more than two million new jobs, while enacting sweeping public safety, immigration, workers' compensation, health care, water, pension, and economic development reforms. California has also established nation-leading targets to protect the environment and fight climate change, and by 2030 the state will: reduce greenhouse gas emissions 40 percent below 1990 levels, generate half of its electricity from renewable sources, double the rate of energy efficiency savings in its buildings, and reduce today's petroleum use in cars and trucks by up to 50 percent.

Tickets are required to attend this event, with reduced prices offered to Pepperdine University faculty, staff, and law students.

For additional information, and to purchase tickets, visit the Pepperdine University School of Law website.