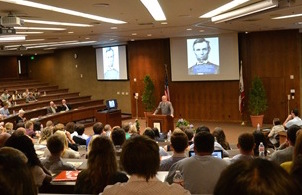 Last week, the Parris Institute for Professional Formation hosted 227 first-year law students for Pepperdine Law's inaugural "Launch Week." With an intensive series of sessions, speakers, and clinics ranging from "How to Make a Difference in the Law" and "Lincoln's Lessons for Lawyers" to "Legal Reasoning and Writing" and "Defining Your Path," the groundbreaking event sought to redefine what it means for a student to begin a legal education: the beginning of his or her career.

"The Parris Institute Launch Week is not an elaborate version of orientation. It is a week-long introduction to the core values of professionalism," says Al Sturgeon, dean of students and director of the Parris Institute.

Among the speakers was André Birotte Jr. ('91), recently sworn in as a federal district court judge for the busy Central District of California. Birotte is the third Pepperdine Law alumnus to become a federal judge in the last two years. He told students, "How I got here is mentors made along the way, starting right here Pepperdine."

Pepperdine University president Andrew Benton also addressed students, reminding them that "law is a noble profession." Himself a lawyer, Benton told of his father explaining to him as a boy that the most respected man in his town was a judge, leading Benton to make his eventual decision to pursue a law degree.

The final session was led by attorney Bob Goff, best-selling author of Love Does and founder of Restore International. "Want to make a difference in the world? Go be the humblest version of you," Goff exhorted students, telling stories of how love in action changed lives and formed professional relationships around the globe.

"Although I had very high expectations for Launch Week, my expectations were far exceeded," says Dean Sturgeon. "I was confident that the new students would benefit from the week, but I was surprised by how quickly and enthusiastically they embraced the objectives of the Parris Institute. The Parris Institute hopes to inspire students to invest in who they are as leaders as much as they invest in what they know as lawyers, and the incoming class displayed a willingness to invest in relationships, advocate for justice, and live a well-balanced life. The Class of 2017 has been launched on an exciting trajectory, and the future is bright."

All 222 students who committed to Pepperdine were on campus last week, and an additional five 1Ls joined during the week. The high attendance continued a trend of excellent data for Pepperdine Law, which was one of only 37 law schools in the country to experience an increase in applications for this academic year. Pepperdine was one of six schools with an application increase of twenty percent or more.

Parris Institute for Professional Formation
The formation of the Parris Institute was announced in spring of 2014, the result of the generosity of Carrol and R. Rex Parris. A million-dollar gift from Ms. Parris, a Seaver College Board of Visitors member, and Mr. Parris, mayor of Lancaster, California, and partner of R. Rex Parris Law Firm, enabled Dean Deanell Tacha and the School of Law administration to unify and expand on Pepperdine Law's pre-existing "practice-ready" initiatives like the alumni-mentoring Preceptor Program and Pepperdine's nationally recognized clinical programs and open-door policy.

The Parris Institute has three major components, including Launch Week: