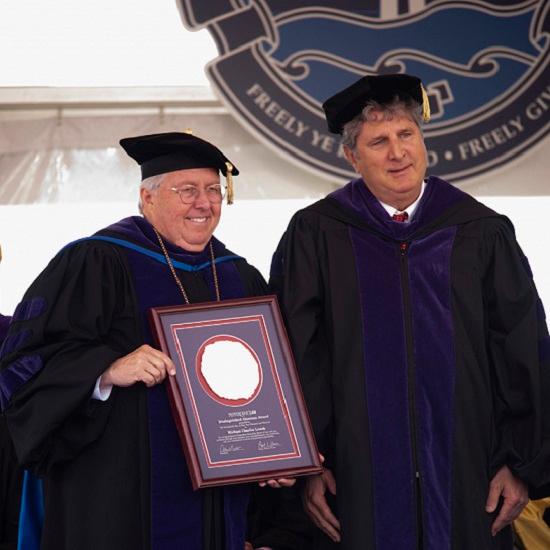 Pepperdine University president Jim Gash (JD ’93) presented Leach with the Distinguished Alumnus Award at Caruso Law’s 2019 commencement ceremony, where Leach remarked, “I’ve always thought that going to law school is one of the toughest challenges society has to offer.” Leach and his wife Sharon are Founding Partners of the recently completed 50 for 50 Campaign, which provides scholarship support for Caruso Law students.

Gash shared, “I had the pleasure of getting to know Mike over the years and appreciated so much his sense of humor and wit. As a former college quarterback, I also tremendously admired his creativity and strategic thinking on the football field.”

Paul L. Caron, Duane and Kelly Roberts Dean of Caruso Law, said “Sports Illustrated today rightly called Mike an ‘American original.’ He was a maverick in the best sense of the word: his rare combination of brilliance, independence, and folksy humor drew people to him and made him a great success in football and in life.”

In 2009 Leach was featured in Pepperdine Law Magazine, in which he commented on his appreciation for his legal education, saying, “Law school will teach you how to research, but your job is to discover solutions to problems. Now I’m in charge of 130 players, 10 coaches, an entire strength staff, training staff, video staff, and academic staff; there are plenty of problems to solve every day.”

“I was so privileged to have him as a student and then a dear friend,” said Janet Kerr ('75, JD '78), Pepperdine University vice chancellor and Pepperdine Caruso Law Professor Emeritus. “Usually the professor is a mentor, but Mike was a mentor to me through the years. We talked about everything from pirates to the air raid offense that became one of the most innovative strategies in the history of football. Mike lived his life passionately and did what he was born to do. I am grateful to have known him.”

Ron Phillips, dean emeritus at Caruso Law, shared these remarks about his relationship with Leach:

Mike spent his professional years doing what he loved most, and right up to the very end. For many years we have touched base with each other after every game, and in recent years through text messages. Two typical phrases oft-included in Mike's texts were "We've got to get better," and "I was proud of our team." He dearly loved his players and his coaches, and that was always apparent. However, he was not only an innovative and highly successful football coach. He was also the author of books that had nothing to do with the sport, and he captured everyone's imagination when he spoke about an endless variety of things. He was clever, highly entertaining, truly thoughtful, and very bright. He will be sorely missed by family, friends, and many who never met him, but admired him for so many different reasons. I am thankful that Mike was one of ours here at Pepperdine Caruso School of Law and that he was my dear friend.

Leach held a bachelor’s degree from Brigham Young University, a master’s degree from the United States Sports Academy, and a juris doctor degree from Caruso Law. He is survived by his wife and four children.