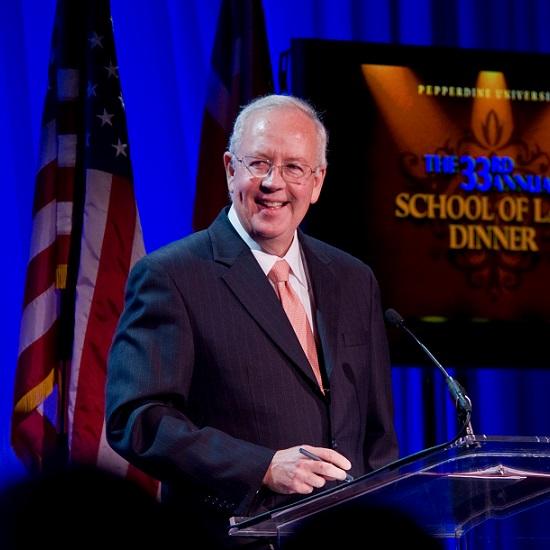 Pepperdine University Caruso School of Law mourns the passing of Kenneth W. Starr, who served as the Duane and Kelly Roberts Dean and professor of law from 2004 to 2010. He was 76.

"I had the privilege of serving on the faculty and in the administration of the law school during Ken's tenure as dean,” said Pepperdine University president Jim Gash. “In that period, I witnessed firsthand Ken's deep love for our students and his commitment to advancing Caruso Law as one of the preeminent Christian legal education programs in the US and around the globe. I am profoundly grateful for Ken’s friendship, mentorship, counseling, guidance and encouragement through the years."

In the five years under Starr’s leadership, Caruso Law made significant academic and reputational strides as the school began its ascent into the top tier of law schools. While serving as dean at Caruso Law, Starr devoted himself to the academic enterprise and brought his considerable legal knowledge to the classroom. He regularly taught courses in his areas of expertise, including current constitutional issues, religion and the constitution, advanced constitutional law, and appellate advocacy.

During his deanship, Starr modeled the servant leadership he hoped to inspire in future lawyers by taking on pro bono cases and volunteering at local humanitarian organizations. He was the law school’s greatest advocate and established the Dean Ken Starr Excellence Fund in order to support important initiatives. As an academic mentor and leader, Starr is warmly remembered by his former students and colleagues for taking a personal interest in their endeavors and encouraging them to pursue academic and scholarly excellence along with generosity of spirit.

Pepperdine University senior vice chancellor and Caruso School of Law Dean Emeritus Ronald Phillips commented, “There are so many of us whose lives have been better because of Ken. He has done so much to make this world a better place.”

In 2007 Starr oversaw the establishment of the annual William French Smith Memorial Lectures on Law and the Judiciary, a lecture series designed to bring judges, attorneys, and law professors to Caruso Law to speak on judicial issues. A gala held at the Ronald Reagan Presidential Library and Museum to introduce the series was attended by former Attorney General Edwin Meese, former governor of California Pete Wilson, and former First Lady Nancy Reagan. Starr continued to raise the visibility of the law school by inviting Supreme Court justices Sandra Day O’Connor, Antonin Scalia, Anthony M. Kennedy, Clarence Thomas, Samuel A. Alito, and Chief Justice John A. Roberts to speak at events such as the William French Smith lecture series and the annual School of Law dinner.

“I am honored to be following in Ken Starr’s giant footsteps,” said Paul L. Caron, the current dean of Caruso Law since 2017. “He accomplished so much to advance Pepperdine’s unique position in legal education, combining academic and research excellence with a deep-rooted commitment to our Christian mission.”

Prior to his deanship at Caruso Law, Starr served as solicitor general of the United States and argued 36 cases before the Supreme Court. He also served as United States circuit judge for the District of Columbia; counselor to United States Attorney General William French Smith; and law clerk to Chief Justice Warren E. Burger and Fifth Circuit Judge David W. Dyer. Starr served as independent counsel for five investigations. Following these appointments, Starr worked as a partner at Kirkland & Ellis LLP and as a visiting professor at New York University, Chapman University School of Law, George Mason School of Law, and Caruso Law. In recent years, he authored a book on religious liberty and practiced appellate law at the Lanier Law Firm based in Houston.