Co-hosted on Thursday, May 10 by the new Pepperdine/Straus Institute Dispute Resolution Inn of Court

The first coast-to-coast program in the history of the American Inns of Court was co-hosted on Thursday, May 10 by the new Pepperdine/Straus Institute Dispute Resolution Inn of Court and its “sister inn,” the Justice Marie Garibaldi ADR Inn of Court, New Jersey.

The program, “Mixing Modes: An Interactive Discussion about Our Growing Experience with Interplay between Mediation, Evaluation, and Arbitration,” was co-sponsored by the Straus Institute.  Events on the Pepperdine campus and in Basking Ridge, New Jersey were linked using an online platform.

Professor Tom Stipanowich, Associate Dean leading the Straus Institute, was joined by Laura Kaster, former counsel for AT&T and an active arbitrator and mediator, and Professor Veronique Fraser, Canadian law professor and Pepperdine alumna, for an interactive discussion focused on the practical, legal and ethical issues associated with various scenarios involving multiple dispute resolution processes (mediation, evaluation and arbitration), and the impact of cultures and legal traditions.  The West Coast half of the event was held at the Graziadio Conference Center on the Pepperdine campus, where Prof. Stipanowich appeared in person and the other speakers were visible on a large screen.

The Pepperdine/Straus Institute Dispute Resolution Inn of Court was launched this year by an Organizing Committee comprised of Prof. Stipanowich, Prof. Peter Robinson, and a group of Straus alumni, adjunct faculty and lawyers and practitioners including Hon. Alex Williams, Steve Brawer, Steve Lepley (current president), Rebecca Callahan, Paul Rafferty, Darryl Darden.   The Inn was created with the goal of creating networking and educational opportunities for Straus alumni and students alongside other experienced lawyers and dispute resolution professionals. The Inn was inspired by the Garibaldi ADR Inn, of which Prof. Stipanowich is been an honorary. Other recent Inn dinner events have been hosted at the downtown LA offices of Jones Day.

The event was recorded and may be viewed here. 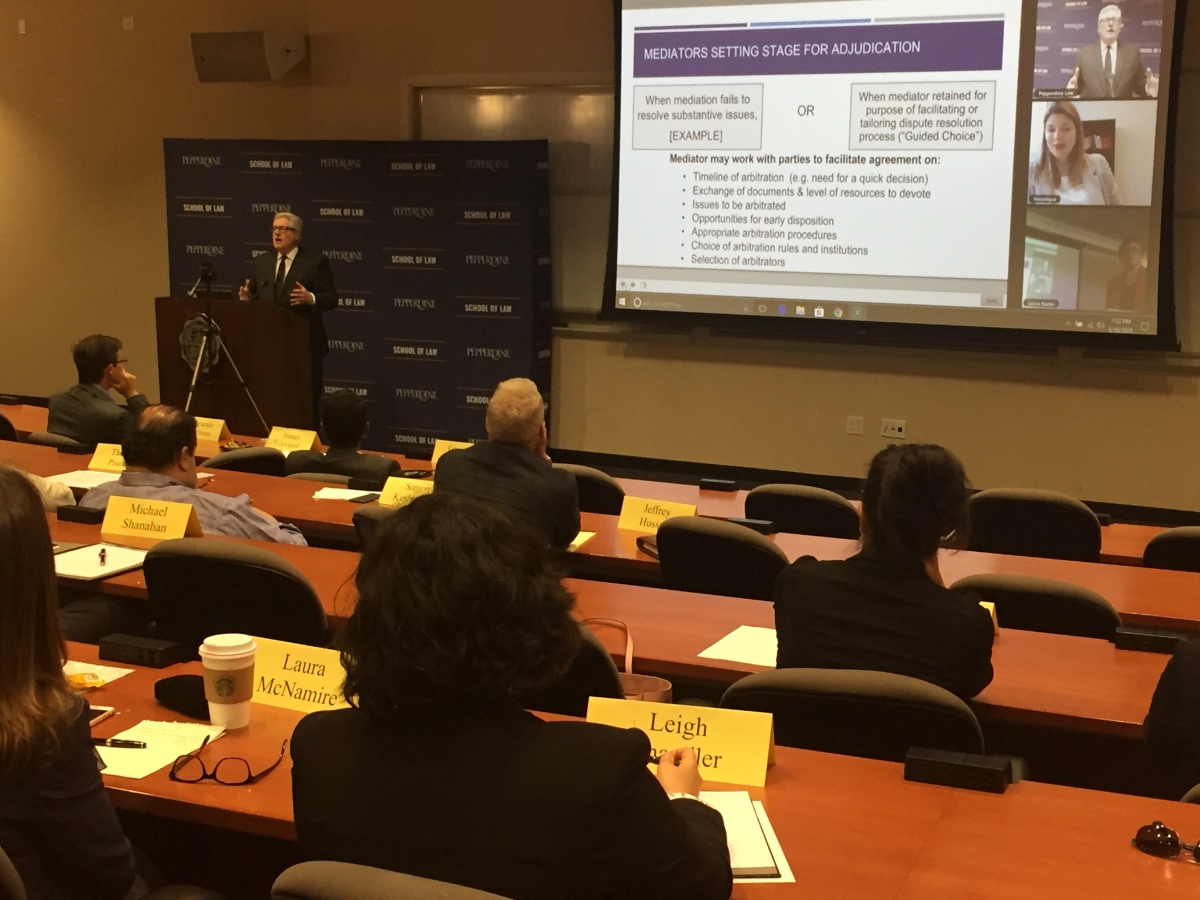