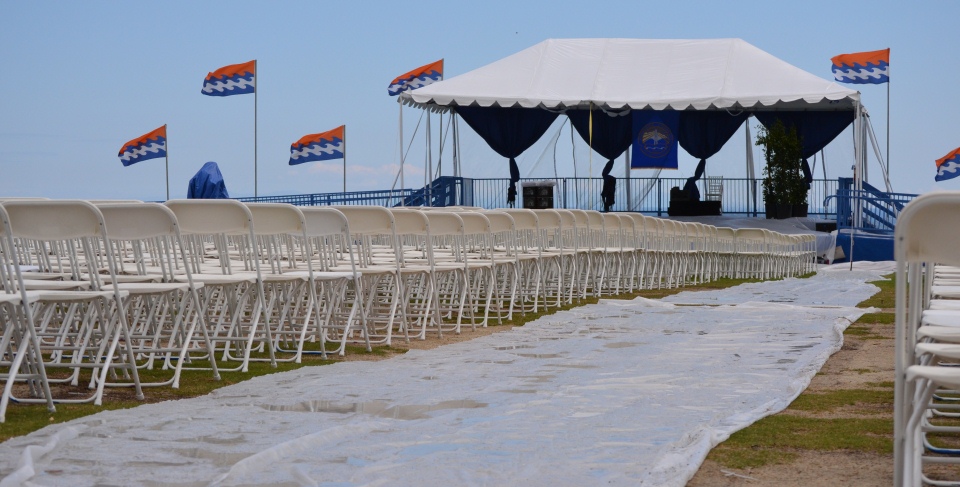 A rare rainy day in Malibu last Friday prompted Pepperdine School of Law to move its 2015 School of Law Commencement ceremony from the University's Alumni Park to Firestone Fieldhouse. The May 15 event, which saw over two hundred graduates receive degrees, featured a Commencement address by Mark Lanier, recently named 2015 Trial Lawyer of the Year by The National Trial Lawyers. Lanier also received a honorary law degree during the ceremony. 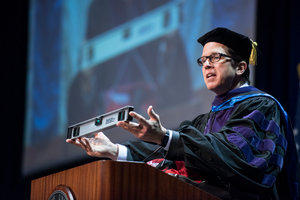 Lanier's address discussed having the right "tools for a meaningful career." Noting that trial lawyers enjoy visual aids, Lanier delivered his remarks with the aid of a bag of literal tools like a hammer and saw. Among the moments receiving the most applause was Lanier's story about being told by a boss that Lanier would only be a "B+ lawyer" as long as he kept putting his family before his job. Lanier described his mental reaction as, "This is so cool! I can be a B+ lawyer and still have a family!"

The invocation was delivered by Robert C. "Charlie" Walker, Jr. (JD '15), the Pledge of Allegience led by Matthew T. Sessions (JD '15), and the National Anthem sung by Kelsey R. Einhorn (JD '15). The student speaker was Leslie A. Ballinger (JD '15), who recalled her father encouraging her to "run the race" at Pepperdine Law during challenging times like the transition from Texas to southern California. She described one conversation:

"I called my father, who has endless wisdom and -- after helping raise me -- the patience of a saint .... I told him, 'I want to come home ... The people here are too weird. The men here have long hair and wear sandals!' To which he replied, 'Well, Leslie, so did Jesus.'"

Dean Deanell R. Tacha presented the Distinguished Alumnus Award to The Honorable Beverly Reid O'Connell (JD '90), U.S. District Court Judge for the Central District of California and the first alumna from Pepperdine School of Law to sit on the federal bench. 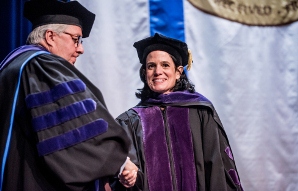 "Twenty-five years ago, I sat where you are sitting and wondered what my career would look like," O'Connell said. "I certainly never thought I'd be a distinguished anything, I'll tell you that. I feel I should be giving this school an award."

"I doubt there is another law school in the country -- or anywhere -- that can say it exposes such a high percentage of its graduates to these key practice tools and insights," says Thomas J. Stipanowich, director of the Straus Institute.

Video of Commencement 2015 may currently be viewed on the University Livestream account.