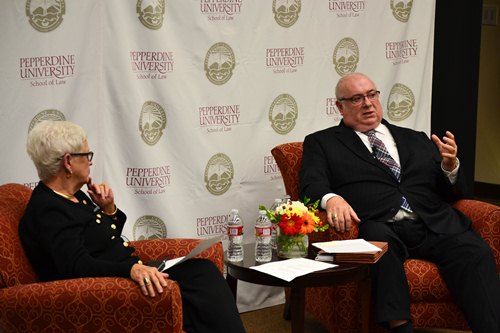 MALIBU, CA, October 30, 2014 --The Washington Post has called Senior Judge Royce C. Lamberth, U.S. District Court for the District of Columbia, "a shoot-from-the-hip Texan known for taking a hard line against what he sees as government incompetence" and "a genial giant of a public servant." Today, Judge Lamberth joined Dean Tacha -- former Chief Judge, US Court of Appeals for Tenth Circuit -- for a candid conversation about transnational litigation. The discussion was held in Pepperdine Law's Mendenhall Appellate Courtroom before an audience of students, faculty, and visitors.

Judge Lamberth served as the District of Columbia's Chief Judge for five years before assuming senior status in 2013. He ruled on a number of notable cases during his tenure on the bench, ranging in topic from stem cells to Guantanamo habeas corpus petitions. He also presided over the U.S. Foreign Intelligence Surveillance Court from 1995 to 2002, including the tumultuous years after the 9/11 terrorist attacks.