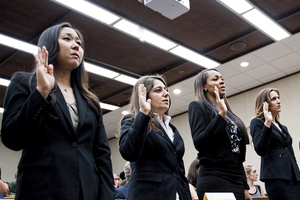 Last Friday, June 6, in the Mendenhall Appellate Courtroom, fifteen Pepperdine Law graduates were admitted into the California and federal courts before an audience of sixty friends, family, staff, and faculty. The oaths of office were administered by fellow alumni The Honorable Ryan J. Wright (JD '97), Superior Court of Ventura County, and The Honorable Beverly Reid O'Connell (JD '90), U.S. District Court for the Central District of California.

In remarks before leading the state oath, Judge Wright observed, "There are never enough really good attorneys, and ones from Pepperdine tend to be the really good ones." He noted that five of the 28 Ventura County judges were Pepperdine Law graduates.

Judge O'Connell also reminded graduates of their unique education and how it will apply to their transition to the professional world. "You studied at a place where values matter, where integrity matters, and where relationships matter," she said. She recalled being accompanied by Professor Shelley Saxer on an airplane to her final interview during the federal judge application process. "These folks are here for you."

The February bar admissions ceremony was one of Pepperdine's largest ever. Pepperdine Law graduates enjoyed a February California bar passage rate of 92.3% among first-time takers. The state average was 55%.