Ed Larson's New Book, To the Edges of the Earth, Reviewed in Wall Street Journal

To the Edges of the Earth: 1909, The Race for the Three Poles, and the Climax of the Age of Exploration

The latest publication from Pulitzer prize-winning historian and School of Law Professor Edward Larson, To the Edges of the Earth, has been warmly reviewed by the Wall Street Journal's Howard Schneider. Larson's narrative routes readers through 1909, the Race for the Three Poles, and the climax of the Age of Exploration. Schneider writes, "These plucky explorers were 'celebrities of the day.' Their fame was hard-won in regions that contained innumerable hazards: relentless blizzards, months-long spans of no sunlight, ferocious gales, shifting ice packs. Moreover, it might be hard for people today to understand just how primitive—compared with our GPS era—the exhibitions’ equipment and scientific instruments were. Shackleton took a car on his trek to the South Pole, a bad idea."

A prolific writer, "To the Edges" is Larson's tenth single-authored book.

Mr. Larson, an academic and author of many other books (including a previous work on exploring Antarctica), is a talented storyteller with a dry sense of humor, and the nicest compliment that I can pay him is that he does full justice to his three protagonists’ remarkable bravery, resourcefulness, accomplishments—and flaws. His suspenseful and sometimes moving narratives prompt the reader to ponder two fascinating issues. The first is how important character (intelligence, valor, leadership prowess) was to these men’s survival, as opposed to just plain luck (the weather, guessing the right route, finding stored food caches). The second issue concerns Peary’s and Shackleton’s motivations. They publicly maintained that they initiated their quests to enhance the grandeur of their respective nations. Mr. Larson’s scholarship indicates that both men also lusted after fame and fortune. Cynics could conclude that Peary and Shackleton were hypocrites. And yet, my own cynicism notwithstanding, I can’t help thinking that these two adventurers (even mendacious Peary) wouldn’t, couldn’t, have endured the hellish ordeals they did if they hadn’t possessed a modicum of idealistic patriotism.

The full review from the Wall Street Journal may be found here. 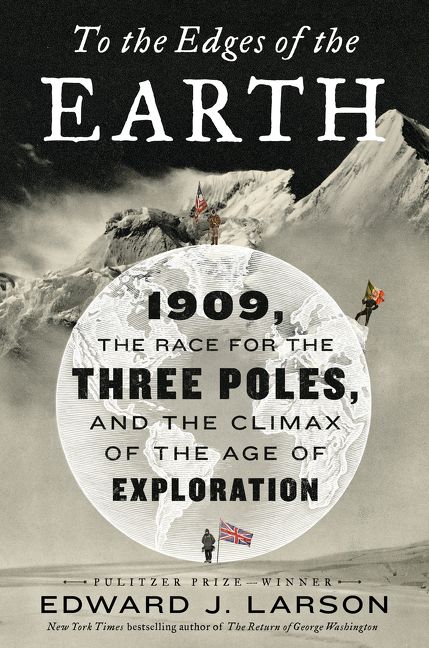