On Board with Jonathan Smith (JD '13)

The average commute by bus from Calabasas to downtown Los Angeles is an hour and a half.

The average law school graduate, according to the National Jurist, needs 60 days and 600 hours of study to pass the California Bar Exam.  On average, Jonathan Smith had three hours on a bus that took him to and from his judicial clerkship.

The U.S. District Court in downtown LA is a long way from Brigham Young University where Jonathan majored in chemical engineering. During his junior year, Jonathan met a patent attorney who also graduated with a degree in chemical engineering. With his interest piqued, Jonathan immediately began researching the requirements for law school. Having grown up in California, not too far from Pepperdine, Jonathan says the school was always at the top of his list. Recently married, he and his wife set their sights on Malibu, and eventually Jonathan became the first in his family to attend and graduate from law school.

“I can trace back every single job I got to a law professor that helped me get the connections.”

In his last semester of law school, Jonathan worked as a research assistant to Dean Jim Gash. Jonathan said Dean Gash embodied the open door policy and accessibility known of Pepperdine professors. Jonathan looked to Dean Gash as a role model of someone who left a large firm to follow his passion and answer the call to service through his dedication to legal education. Gash made the initial connection between Jonathan and the Honorable Beverly Reid O’Connell (JD ‘90) and assured Jonathan that he could clerk while studying for the bar exam so long as he dedicated himself to efficiency. 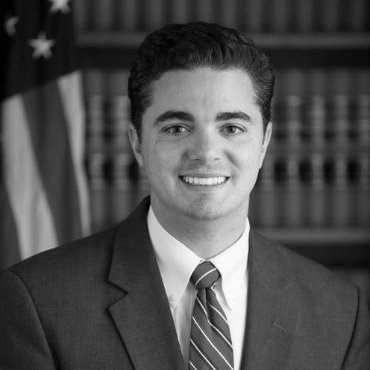 In November of 2012, President Obama nominated Judge O’Connell to serve as a United State District Judge for the United States District Court for the Central District of California. Jonathan, still a semester away from graduation, acted swiftly to submit the requisite application materials. He explained the whirlwind succession of events: “I interviewed on a Monday, got an offer on Wednesday, graduated that Friday, and started (the clerkship) on Monday.” Despite needing to prepare for the bar exam, Jonathan knew he wanted to support Judge O’Connell during the critical time following her appointment as federal judge. He called that summer “especially crazy,” but thanks to the portability of modern technologies, Jonathan was able to optimize the commute time and used an iPad program to study for the bar exam during the hour and a half ride to and from his home.

For a whole year, Jonathan clerked six days a week, from 7am to 7pm. “You get unmatched experience when you clerk,” he explained. “It’s years worth of experience crammed into a single year.” When describing the impact of the clerkship on his legal career, Jonathan said, “Judge O’Connell is the most amazing mentor I could have ever hoped for. She really cared about my success, my career, and then helped me get there! Judge O’Connell really embodies Pepperdine and the kind of (supportive) atmosphere.” Following his yearlong clerkship, O’Connell, an alumna of Morrison and Foerster LLP, connected Jonathan to the firm where he currently practices as a patent and commercial litigation associate.

Today, Jonathan is an active member of the Pepperdine Law alumni network. Participating for a third year as a preceptor, his goal is to unveil any lingering law school mysteries for 1L students. Jonathan adds, “I want people to see that in law school there is a big focus on single track of going to a big firm, and sometimes there’s not a lot of consideration of all the other options out there.” His intended message as a preceptor is to expand upon these traditional options, to encourage students to answer their own call to service, and to convey that “success is not defined by what your peers are thinking.”