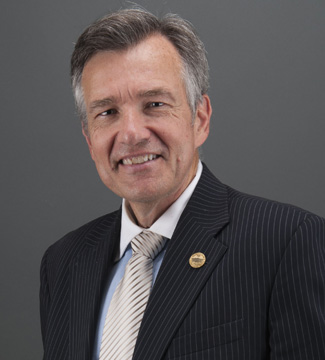 Ambassador Kmiec practiced law with a well-respected Chicago law firm; began his teaching career at Valparaiso University; was awarded tenure and named director of the Center for Law and Government as the University of Notre Dame, where he taught for close to two decades and founded the Journal of Law and Ethics in Public Policy. He served as Dean and St. Thomas More Prof. at The Catholic University of America in Washington D.C.; and has been associated with Pepperdine, with breaks for government service, since 1995, when he came as a Straus Distinguished Visiting Scholar.

Beyond the university setting, Ambassador Kmiec served Presidents Ronald Reagan and George H.W. Bush during 1985-89 as Assistant and Deputy Assistant US Attorney General, Office of Legal Counsel, U.S. Department of Justice. He was nominated for foreign service to the Republic of Malta by President Barack Obama and served as chief of mission from 2009 to 2011. He was confirmed for both positions without dissenting vote in the U.S. Senate.

Highly respected in the Republic of Malta, the Ambassador was instrumental in the resettlement of close to eight hundred individual migrants and families seeking freedom from the violence and deprivation pervasive in sub-Saharan Africa. When an uprising required Embassy- Tripoli to close and its personnel to be evacuated, Ambassador Kmiec deployed a rented catamaran to return several hundred American citizens and other foreign nationals to safety.

A wide-ranging writer and engaging speaker, Ambassador Kmiec has appeared on national news programs such as Meet the Press and the Newshour and had a syndicated column for the Catholic News Service, and wrote a regular column in the Chicago Tribune. He still writes regularly for the Huffington Post.

Ambassador Kmiec is the co-editor of three casebooks on the United States Constitution as well as a two-volume treatise on land use. He has authored: an account of his service in the Department of Justice, The Atty. Gen's Lawyer (1992); the challenges of life and death during his ambassadorship, Lift Up Your Hearts (2012), and a popular book which had an electoral impact on the election of Barack Obama, Can a Catholic Support Him? (2008). A knowledgeable and scholarly Catholic voice in America, he has worked to promote interreligious understanding and civility. Recently the Oxford University published his thoughts on Secularism, Catholicism and the Future of Public Life, wherein Amb. Kmiec's work on religious freedom is examined by "an international cast of experts from a range of fields, including legal theory, international relations, journalism, religion, and social science." His first book, Cease-fire on the Family (1984) highlights the family as the cure for cultural malady.

A White House Fellow (1982-83), Professor Kmiec is one of a few individuals who has received the Distinguished Service Award from two cabinet departments-the Department of Justice and Housing and Urban Development. He was awarded the Edmund J. Randolph Award by the attorney general. He was honored as a 40th anniversary Fulbright distinguished scholar, and lectured in Hong Kong and Kuala Lumpur.

Ambassador Kmiec is a member of the bar of the US Supreme Court, a number of federal appellate courts, the Court of International Trade and the state bars of Illinois and California.