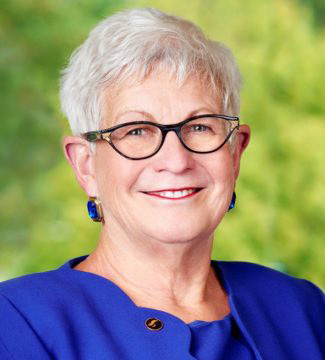 Deanell Reece Tacha was the Duane and Kelly Roberts Dean of Pepperdine Caruso School of Law from 2011-2016. She was appointed by President Reagan to the U.S. Court of Appeals for the Tenth Circuit where she served as a circuit judge from 1986-2011. She served as Chief Judge from January 2001 through 2007. Deanell Tacha earned her bachelor of arts degree from the University of Kansas in 1968 and her juris doctorate from the University of Michigan in Ann Arbor in 1971. She was a White House Fellow (1971-1972).

She returned to the University of Kansas where she served as associate professor at its School of Law from 1974-1977 and as professor of law from 1977-1985. She served as associate dean from 1977-1979, as associate vice chancellor for Academic Affairs from 1979-1981, and as vice chancellor for Academic Affairs between 1981-1985. In 1992, Tacha received the KU Alumni Association's Fred Ellsworth Medallion for extraordinary service to the university and received its most prestigious award, the Distinguished Service Citation, in 1996. In January of 2010, she was named "Kansan of the Year" by the Native Sons and Daughters of Kansas.

Prior to joining the University of Kansas, she practiced law in Washington, D.C. and Kansas, and was for three years Director of the Douglas County Legal Aid Clinic (1974-1977). During her distinguished career, Tacha served as a member of the Judicial Conference of the United States and was named in 2006 by U.S. Supreme Court Chief Justice John Roberts to the Conference's Executive Committee. Previously, Chief Justice Rehnquist appointed her to serve two terms as Chair of the Conference's Committee on the Judicial Branch which oversees the federal judiciary's relationship with Congress and the executive branch. Tacha also was a member of the United States Sentencing Commission which is responsible for studying and making recommendations to Congress about federal sentencing policy.

She has represented the judiciary of the United States internationally on several occasions, including participating in the American College of Trial Lawyers Anglo-American Legal Exchange among members of the bench and bar in the United States and in the United Kingdom. In 1992, the American Bar Association selected Deanell Tacha as a member of a delegation of lawyers and judges who traveled to Albania to assist that nation in developing a new constitution and government, and in 2007, she represented American judges in the Canadian-American Legal Exchange.

Deanell holds professional memberships in the American Bar Association, American Bar Foundation (Life Member), American Law Institute (Life Member), Kansas Bar Association, Phi Beta Kappa, and Order of Coif. She is admitted to the Bar in Kansas, Missouri, and the District of Columbia. Additionally, she is a past chair of the Appellate Judges Conference and a former member of the ABA's Commission on Women in the Profession.

Deanell Tacha currently serves on the California Bar Task Force on Admission to the Bar and the California Supreme Court Power of Democracy Steering Committee. She also serves on the National Board of Trustees of Equal Justice Works and the ABA's Rule of Law Initiative.

She has held leadership positions in numerous civic and charitable organizations including chairing the Kansas Territorial Sesquicentennial Commission, the Lawrence/Douglas County Heritage Area Commission, and the Freedom's Frontier National Heritage Area Board of Trustees. She is on the Board of Trustees of the Kansas University Endowment Association. She has served as a member of the board of directors or as a trustee at Kansas State Historical Society, Kansas Health Foundation, Baker University, Saint Paul School of Theology, Lawrence Arts Center, and First United Methodist Church, Lawrence, to name a few.