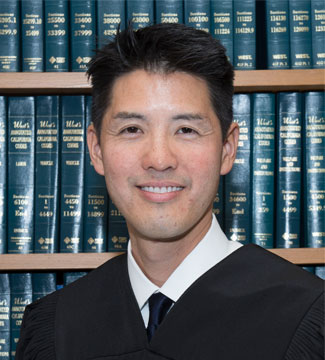 Judge Curtis A. Kin presides over unlimited jurisdiction civil cases for the Superior Court of California, Los Angeles County. He previously oversaw a criminal department for over five years and has sat by designation on the California Court of Appeals numerous times. Prior to his judicial appointment, Judge Kin was a prosecutor at the U.S. Attorney's Office for the Central District of California, where he served as Chief of Criminal Appeals, Chief of General Crimes, and Chief of Domestic Security.

Judge Kin has worked as a litigation associate at Cravath, Swaine & Moore in New York and served as a law clerk to Hon. Sonia Sotomayor on the U.S. Court of Appeals, Second Circuit, and Hon. Jed S. Rakoff (U.S. District Court, S.D.N.Y). He graduated with distinction from Stanford Law School, where he was Managing Board Senior Editor for the Stanford Law Review, and obtained a B.A. in International Relations, magna cum laude, from the University of Southern California. Judge Kin has been an adjunct professor teaching trial practice skills at Pepperdine Caruso Law since 2003. He also teaches Advanced Trial Advocacy at Loyola Law School and taught Criminal Procedure at USC.