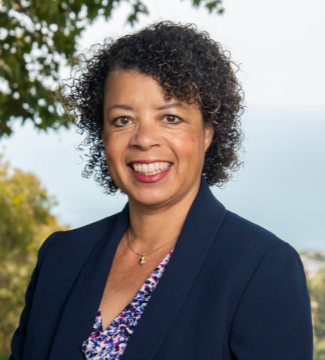 Professor Goodman joined the Pepperdine faculty in 2001. She teaches Evidence, Constitutional Law, Racial Justice, Trial Practice and Comparative Anti-Discrimination Law. She has participated in the Sudreau Global Justice Program in both Uganda and India, and taught in the London Program. Professor Goodman also has taught courses in Community Outreach/Youth Mentoring, Criminal Law, and Trial Preparation and Settlement. She serves as an advisor to the Black Law Students' Association and the American Constitution Society Chapter, and formerly served as adviser to the Women's Legal Association, and as a mock trial team coach. Professor Goodman writes on equal protection topics, including implicit bias, algorithmic bias, affirmative action, preferences, diversity and racial privacy, as well as evidentiary and criminal law issues. The second edition of her book, California Evidence, in Aspen's Examples and Explanations series, as well as the Seventh edition of the Mendez, Goodman and Mainero Evidence textbook are now available.

While at Stanford Law School, Professor Goodman served on the board of directors for the Annual Women of Color and the Law Conference, worked as a teaching assistant in the political science department, and was an assistant editor for a new journal on gender issues. After law school, she worked as an associate at Manatt, Phelps & Phillips (1991-93) and Gipson, Hoffman & Pancione (1993-1995), engaging in civil litigation in state and federal courts. In 1995, Professor Goodman began teaching at UCLA, and created and taught a course in lawyering skills for public interest attorneys.

Professor Goodman is the Vice President of Diversity, Inclusion, and Outreach of the Los Angeles County Bar Association and Secretary of LACBA's Diversity in the Profession Section, as well as Treasurer of the National Conference of Women' Bar Associations. She now serves as Chair of the AALS Litigation section, and formerly of the Evidence Section. She is also on the board of Schools on Wheels, a local nonprofit that provides tutors and school supplies for homeless youths, and the Western Center on Law and Poverty. She has served as an officer of the Black Women Lawyers Association of Los Angeles, as the 2016-2017 President of California Women Lawyers, and the 2017-18 President of its Foundation. Professor Goodman is a frequent speaker on the subject of diversity, equity, inclusion, and bias.